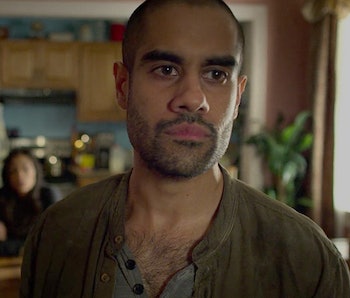 A new pair of would-be Time Lords have emerged as potential candidates for the new lead on Doctor Who: Luke Treadaway and Sacha Dhawan — and the latter might be recognizable to Marvel fans as Davos from Iron Fist.

On Friday, citing unnamed sources, the Radio Times claimed that Treadaway and Dhawan have joined the long list of possible Time Lords to replace Peter Capaldi. If either of the actors turns out to take the part, it means the next Doctor will be young, attractive, and full of a dark sense of brooding.

Though he doesn’t appear until later in Iron Fist’s first season, Dhawan’s Davos has villainous tendencies, despite being a long-time friend of Danny Rand. He’s largely jealous of Danny becoming the Iron Fist and is slated to become a full-on villain in future seasons.

Dhawan also already has a connection to Doctor Who. In Mark Gatiss’s dramatic representation of Doctor Who’s creation in the ‘60s, called An Adventure in Space and Time, he played Waris Hussein, the man who directed the very first Doctor Who serial.

Though Dhawan is a new contender, the supposed current favorite in casting goes to Luke Treadaway. Treadaway stars in Fortitude, a gory TV thriller about a town right on the Arctic Circle in which he plays a scientist. He was also the lead in A Street Cat Named Bob in which he played a drug-addled busker.

Though there is still no confirmation from the BBC on casting the new Doctor, many names have been considered, or at least mentioned, including previous frontrunner Kris Marshall or even Phoebe Waller-Bridge. One way or another, they’ll have to make a decision soon enough.

On Friday, when Inverse reached out to popular betting site Ladbrokes for an update on the odds of Doctor Who casting, representative Matthew Shaddick said that all bets on the matter had been shut down as a “precaution.”

Doctor Who airs Saturdays at 9 p.m. Eastern on BBC and BBC America.