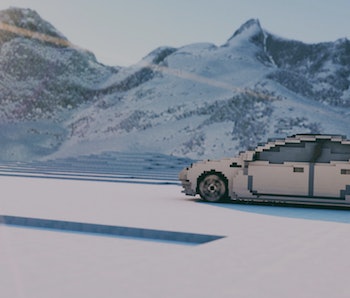 When a 10-year-old suggested to Elon Musk that Tesla hold a homemade advertisement competition, he of course obliged, and launched the “Project Loveday” contest. Minecraft has answered with a 51-second video called “Tesla Meets Minecraft.”

The clip — created by the Minecraft-focused company “block,” which is part of goCreative Group — shows a Minecraft version of the Tesla Model 3 driving and smoothly swerving through a range of terrains to a background of extremely swanky music.

“We wanted to […] do cool shots of the car switching color and the surroundings changing,” goCreative CEO Brandon Relph tells Inverse, to portray things that are possible “in animation and in Minecraft” but not “in the real world.”

The video was created in just two weeks with a team of about 10, who used in-house software to create six landscapes, built the car in Minecraft, and used Cinema 4D animation software to combine them. The team tweaked Minecraft’s car colors to make them closer to Tesla’s.

Despite that hard work, they’re not just in this game to win it. “We’re big fans of Tesla,” Relph explained. “We met Elon a couple of years ago […] and we’ve been looking for a cool opportunity to do a sort of Minecraft/Tesla crossover-type thing.” He went on, “We’re in it for sort of the enjoyment and the excitement of people hopefully enjoying our project.”

Relph explained that his company is particularly interested in the Model 3’s environmentally friendly features, and that he hopes to expand Minecraft’s role in promoting a more sustainable future. He noted that Minecraft, by depicting melting icebergs and other effects of climate change, can illustrate global warming for a young audience who might otherwise have difficulty grasping the concept. He plans to launch a Minecraft educational program this summer that will focus on sustainability, for which “we’re hoping to gauge the support of Microsoft [Minecraft’s owner] and Tesla.”

Watch the video below, and then check out another awesome Minecraft creation: the hedge maze from S-Town.