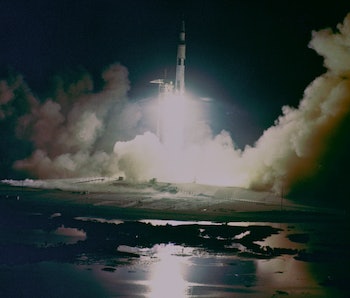 Very few humans have had the privilege to leave Earth and live within the infinite vacuum of space. But most humans have access to a little thing called Netflix — and it’s key to letting the rest of us lame Earthbound folk get a glimpse of what space is really like.

You don’t have to be Poindexter to enjoy these documentaries. Whether your interests align more with astrophysics, black holes, moon landing conspiracies, or blasting space cowboys out into orbit aboard fiery rockets, Netflix has you covered.

This is not, by any means, a highly scientific work, but if you’re interested in learning more about the plausibility of aliens on another world, Extraterrestrial is the best thing you’ll find on Netflix. The two-part miniseries, spurred by the explosion of exoplanet discoveries in recent worlds, digs into what extraterrestrial life might feasibly evolve into if conditions were right, using two different fictional worlds as conceptual playgrounds.

The first world is Aurelia: an Earth-sized exoplanet orbiting a red dwarf star. The second is Blue moon — a satellite of a gas giant within a binary star system. Both episodes take radically different directions in illustrating what evolution on other worlds might look like. While the whole thing is speculative, it’s an engaging look that takes “what if” questions and runs with them in evocative ways.

We here at Inverse are not the biggest fans of Neil deGrasse Tyson, but there is no question he is currently the most prominent spokesperson for astrophysics and space travel. Taking on hosting duties of the Cosmos revival means filling the big shoes left behind by the late Carl Sagan.

Tyson, for his part, does an adequate job. Cosmos is unique in that it does not seek to merely give its viewers information about how the world works — it uses that information to illustrate exactly how much we still don’t know, and show how small all of us are in the context of universe. To that end, Cosmos succeeds.

And it helps that the new series is chock full of sweet animations and special effects.

4. The Beginning and End of the Universe

Another two-part miniseries, The Beginning and End of the Universe centers around theoretical physicist Jim Al-Khalili’s retelling of the history of cosmology, and what scientists have learned about the mysteries of the universe since the dawn of civilization.

And then the twist — Al-Khalili takes viewers into the ideas behind how the universe will end. Yes, the miniseries goes through the whole life cycle of the cosmos, from birth to death. Though Al-Khalili lacks the charisma of other science communicators, he makes up for it with an understated nuance of the subject matter that pulls in even the biggest physics novices.

This is a documentary about how to build a space elevator. Yes, an elevator that would take you into space. It’s an insane idea that scientists are still working on.

Sky Line has problems when it comes to learning about the raw technical and scientific considerations that go into building a space elevator, but it is nevertheless an interesting introduction into such a concept, and provides a good insight into exactly why some people are so enthralled with a project like this.

2. The Last Man on the Moon

With the passing of astronaut Eugene Cernan in January, this documentary has become vital for anyone interested in learning more about NASA’s Apollo program and the work that went into sending people to the moon. The Last Man on the Moon focuses around, well, the last man to ever walk on the moon. In December 1972, Cernan took off aboard the Apollo 17 mission and became the last human who has ever set foot on the lunar surface.

This documentary is an excellent close look not just into Apollo 17, but also in Cernan’s celebrated life as an astronaut and a man of great passion and conviction.

The history of space travel is tied intimately with U.S. history, but let’s not forget that the space race only began after Russia launched the first satellite into orbit. On the other side of the planet, another superpower was at work trying to journey off towards the stars faster and more effectively than the U.S. Cosmodrome is all about the rocket technology Russia pioneered in the 20th century that made space exploration possible, and is an in-depth look at a history not too many people are familiar with.