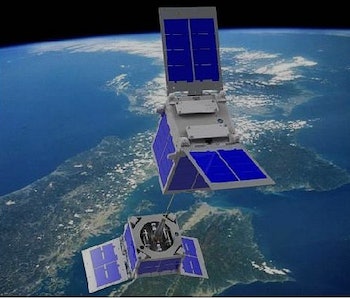 The concept of a space elevator has been floating around (not literally, of course) for more than a century. The idea is simple: you travel into space in a vehicle that’s tethered to a cable attached to a counterweight situated in a zero-gravity environment outside of Earth’s atmosphere. You wouldn’t have to worry about using large rockets or massive amounts of combustible fuel to propel yourself into space — you would just use the cable to ascend and descend as needed.

It’s a ridiculous idea, of course (and rocket-less space launch tech has a pretty poor track record so far), but that doesn’t mean serious researchers haven’t tried to figure out whether it can be done. Introducing: STARS-C (Space Tethered Autonomous Robotic Satellite-Cube), a design for a space elevator headed by a team of Japanese scientists at Shizuoka University. It’s basically a micro-satellite that provides a cable connecting Earth with a space station situated high above the planet’s atmosphere, in orbit.

The prototype STARS-C, unveiled last month, is comprised of an orbiter that weighs a little less than six pounds and is made of two four-inch cubes that connect to a 328-foot long tether made of Kevlar.

The satellite will be delivered to the International Space Station and be released from a JAXA (Japanese Aerospace Exploration Agency) module called Kibo. The two cubic parts will separate in orbit and test out the tether as they move apart.

The findings from this experiment would be expected to provide some unique insight as to what kind of considerations would have to be made if one were to design and develop a full-scale space elevator. In addition, the tether experiment might also prove useful for technology that could help in space debris remediation from the planet’s orbit.

The entire STARS-C spacecraft was made from just $98,000, with assistance from third-party companies and institutions. It’s an incredibly cheap experiment that could have far-reaching implications on future space technology. Still, it’s unclear when exactly the team will get to pull off the experiment itself. JAXA hasn’t yet released launch details regarding Kibo. Hopefully, the agency gets on that sooner rather than later.