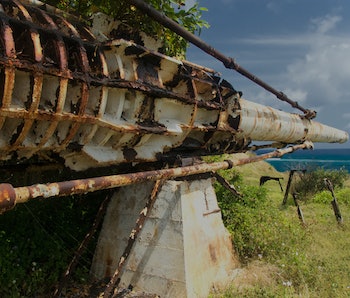 Getting into space is tough, expensive work. It takes a lot of energy to fire a rocket up and move out of the planet’s atmosphere, into a zero-gravity orbit. A method of propulsion that doesn’t require the 326,770 gallons of liquid hydrogen and 99,359 gallons of liquid oxygen needed to get the Saturn V out of the atmosphere would make space launches considerably more affordable for NASA and private companies like SpaceX. This is why people want to build space guns. This is why people have wanted to build space guns for almost three centuries. It’s a logical solution to the problem of fuel, which both powers rockets and drags them down.

No, we’re not talking about laser blasters used to fire at hostile alien ships (although that sounds utterly epic), but a launch mechanism. A true space gun, in the traditional sense, is more like a cannon used to make earthbound projectiles orbital. If the idea worked, the rocket would be unnecessary because spacecraft could be shot through the atmosphere at speed.

Well, for much of the 20th century, people have been trying to make a functional space gun and no one has succeeded just yet. Here’s a short history of the space gun and all those futile efforts to launch things up into space sans rockets.

In his book A Treatise of the System of the World, Newton discusses a hypothetical scenario where a cannon placed on a high mountain can fire objects up into a straight line, away from the surface of the earth, without air resistance. The cannonball experiment essentially demonstrates at what velocity you’d need to fire something into the air in order to watch it fall back to Earth, make it into orbit, or escape the planet’s gravity completely and wander off into space.

Of course, there are technological constraints to building such a cannon. Those constraints would be played around with a bit more about a century later…

In his novel From the Earth to the Moon, the famous science fiction writer tells a story about a small society of a weapons aficionados and its quest to build a space gun to launch people to the moon. Verne’s Columbiad space cannon is nearly 900 feet long and 60 feet wide, and while it does indeed launch three astronauts into space using about 400,000 pounds of gun cotton, their fates are left unknown (until the sequel, of course).

The book was essentially the first depiction of a space gun — although Russian rocket scientist Konstantin Tsiolkovsky would write a paper in 1903 that determined a realistic space gun would run impossibly long and would subject these astronauts of the book to about 22,000 g of acceleration.

In other words, those poor astronauts would be vaporized instantly even if the damn thing could be built.

1918: Germans Hit the Stratosphere From Paris

During World War I, Germany used the principles of a long-range cannon to build the Paris Gun — a grotesquely big cannon that could bombard Paris from about 75 miles away. The shells fired off from this big-ass gun were capable of reaching the stratosphere, the first time human-made objects could make it that high. That’d be a great achievement if the aim wasn’t to kill other people, but hey — milestones are milestones.

A downside of such capability, however, was that the Paris Gun operators needed to take into account the Coriolis effect (the rotation of the Earth) into trajectory calculations.

At the tail end of WWI, the Paris Gun was dismantled and destroyed by German soldiers to preempt its capture by Allied forces, and such weapons were subsequently banned by the Treaty of Versailles.

During World War II, Hitler pushed forward a program known as the V-weapons, which were designed to attack Britain in response to bombing raids on Germany. The third of these weapons was the V-3 cannon, codenamed the high pressure pump, or HDP.

The designs called for a 65-foot long cannon pointed directly at London. Hitler wanted to build 25 of these death machines, but the Royal Air Force managed to bomb the facility where they were being constructed in July of 1944. Two shorter guns were built by the SS, and German forces managed to start firing shells at the city of Luxembourg. They were not effective. The smaller V-3s were dismantled after the war and taken to the U.S. for further testing, before being tossed in 1948.

After WWII, the space race began to come into focus, and the technology behind launching things shifted from artillery to rocketry. In 1961, the United States and Canada jointly created Project HARP (High Altitude Research Project) with the goal of creating a system of non-rocket, low-cost launch system.

HARP was basically the culmination of years worth of work by Gerald Bull, a ballistics engineer who had been pioneering the notion of firing aircraft out of guns. Bull and his partners managed to persuade the U.S. Navy to supply them with an unused 16-inch, 50 caliber battleship gun, and began work at a flight range in Seawell Airport in Barbados. In 1966, the project shifted to Yuma, Arizona, where the gun (extended to 100 calibers) managed to fire off a 400-pound Martlet 2 projectile at a speed of 7,000 feet per second.

The projectile briefly made it into space, at an altitude of 110 miles. That’s a record for gun-launched projectiles that holds to this day.

Budgetary constraints soon forced the cancellation of HARP. Bull returned to Highwater (with the Barbados launch site also under his ownership), and he founded the Space Research Corporation.

The U.S. government started the Super High Altitude Research Project (SHARP) in 1985 at Lawrence Livermore National Laboratory. The goal was to fire objects into the atmosphere via a two-stage light-gas gun — which would ultimately help the country get satellites into orbit.

A light-gas gun works the sample principles of a spring piston airgun — where a piston forces a gaseous working fluid through a barrel into order to accelerate a projectile out in a given a direction. In this case, the piston is actually powered by a chemical reaction, and the working fluid is a lighter gas like helium or hydrogen. Project SHARP started when a scientist named John Hunter realized a light-gas gun would be much better at launching projectiles at high velocities than a an electromagnetic railgun.

A prototype was successfully built in 1992. About 426-feet long, the system could shoot an object off at about a third the velocity needed to get something into space. Successful testing resulted in plans to build the Jules Verne Launcher, which would have boasted a staggering 2.2-mile long barrel. Building such a device would have cost billions of dollars and the government was less than enthusiastic about allocating SHARP that kind of money.

Meanwhile, after HARP closed down, Bull became interested in securing work with other countries through his new country, and started working as an artillery consultant throughout the ‘70s. This included a stint in prison after he was convicted of illegal arms dealings. When he was released, he moved to Brussels and started working with China and — more notably — Iraq.

In 1988, he decided it was the right time to finish what he started long ago: building a working space gun. He managed to convince Iraqi dictator Saddam Hussein to fund Project Babylon, the creation of a 511-foot-long cannon able to place a 4400-pound projectile into orbit.

The first prototype was more modest — 150 feet long, able to shoot an object to a distance of 466 miles away. The second supergun being built, “Big Babylon,” was supposed to be closer to the original proposed length. However, Bull was assassinated in March of 1990 (probably by Israeli Mossad agents) and was never completed.

John Hunter never really gave up on the goal of building a space gun. In 2009, he founded a company called Quicklaunch to build a 3,600-foot long gun mostly submerged underwater that would blast objects into space using hydrogen and methane at about 5,000 Gs. The launcher is really meant to replace the first stage of a rocket before a spacecraft can use another propulsion system to make the rest of the distance out of the planet’s atmosphere. The company estimates launches to come out to about $1,100 per kilogram (four times less than a SpaceX Falcon 9 launch, and 13 times less than a NASA Atlas V launch).

However, Hunter left Quicklaunch in 2012, and the company looks like it’s gone dormant since.

So, to recap: Almost 300 years after Newton first pitched the concept of a space gun, we have no space gun.