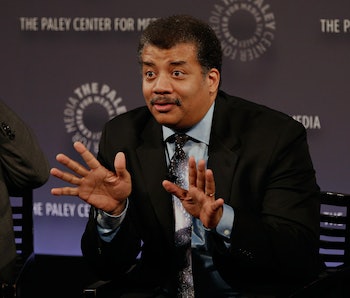 What do you mean you don’t like Neil deGrasse Tyson?”

This is how people always respond when I admit that I have little love for the science communicator the internet knows as NdGT. In the world of science, and in the world of science journalism and communication, this opinion is anathema. My lack of support for the guy standing on the deck of the “Ship of the Imagination” makes me a borderline mutineer. People step away, not wanting, I presume, to be forced into an airlock and jettisoned into space for sharing my apostasy.

Sure, I’m being dramatic, but not that dramatic. People really like Tyson, ugly vests and all. And — for what it’s worth — I’m not surprised by that. The bestselling author of Death by Black Hole, a very good book most NdGT fans haven’t read, came to prominence as a regular guest on The Colbert Report, where he made space science seem fun. Since then, he’s spent a significant portion of his time on talk shows and built his own audience with the StarTalk podcast. He’s also hosted a thoroughly okay revival of Cosmos and served very capably as the Hayden Planetarium’s director. He is, one might say, a man climbing to the heavens by piling up soap boxes.

I’m a science writer, but I primarily write about space. And Tyson is probably more responsible than any other scientist or science communicator for creating an audience for my work. So, why the resentment? Is it genuine or is it just a defiant contrapposto? Unfortunately, it’s the real deal. I’m not a proselytizing hater, but I’m pretty devout.

And here’s the crux of it: He could do so much more.

For all of Tyson’s good deeds in the name of advancing science for the public good, he has committed a fair share of aggravating nonsense. Did he really need to appear on an episode of The Big Bang Theory? That show is awful for science, scientists, and humanity in general. In a generation, when the neurodiversity movement has more sway, we’ll look at it as nothing more than hurtful caricature. Why, Neil?

And what the flying hell was with that flat-Earth spat with B.o.B? I kind of get responding to his first wave of tweets with a rebuttal based in science, but then there was that excruciating diss track (rapped by his nephew) and that appearance on The Nightly Show that seemed to drag his name into the world of bad entertainment. The problem isn’t with rapping, the problem is with presuming that science — and by proxy, scientists — needs to be more approachable.

Tyson stoops when there’s no need.

For instance, he went on a trolly, pointless Tweet spree in which he discussed all the scientific reasons Star Wars doesn’t work in real life. And it’s not the first time he’s decided to deride fictional movies for their liberal interpretation of science. Sure, it’s kind of cute and mostly harmless, but it misunderstands and betrays the potential of a truly potent scientific communicator. The idea should be to ennoble, not nitpick.

And then there are the instances where Neil just starts to make shit up.

Bats arent bugs, and more importantly they aren’t fucking blind. In fact their eyesight is three times better than human beings. Why would you even say this??

In reality, all of this is forgivable — yes, even the misinformation. It’s not ideal, but it hardly erases the good work he’s done.

No, his biggest offense is being an incrementalist. If you’ve ever actually listened to Tyson speak, his overall theme is “science is good and cool.” And that’s, well, good — but it doesnt exactly push us towards greater thinking. He’s just reciting facts or ideas that are already available to anyone with a vested interest in science or access to Wikipedia.

Take for instance this clip of an interview with Stephen Colbert (starts at 1:31). And notice what the title of the video is.

Tyson postures the realization that the universe is composed of billions and billions of stars, that the universe is expanding, and the birth of quantum mechanics as world-shattering breakthroughs that changed the face of the earth. These things were groundbreaking, sure — but they’re not groundbreaking now. Reciting these facts, as passionately as he does, doesn’t make them new. Tyson doesn’t blow our minds by telling us this, because there’s nothing mind-blowing about what he’s saying. He makes the case these are neat concepts — but he makes no effort to explain how they fit in the world of real science.

Most people don’t know much about new astronomical research, but it would be very cool if someone, you know, taught them. And when Tyson goes on about why science is neat, he’s pawning off sentiment as insight. He repackages information into Keurig pods, but that’s about it. He refuses to go a step further to engage with the science in a way that allows him to make a thoughtful contribution and critically evaluate current research and its importance.

And by extension, his audience and followers stop short of engaging with the science in a more meaningful, significant way as well. They are able to absorb the information, but are left with no understanding of how they might be able to use it to generate new, meaningful insight.

And that’s disheartening when you consider that the digital age makes it a thousand times easier for any human to play an actual role in science. Citizen science is a real, positive force nowadays, and it would behoove those individuals who participate in such projects to know how to do more than just collect and file data away with the principle investigators. NASA’s JunoCam, for instance, will invite amateur astronomers to send their own images of Jupiter to the agency — but imagine how much more thrilling it would be if those same amateurs were invited to offer up some sort of analysis about their own data.

At this point, Tyson is the de facto face of space science in this country. He doesn’t need to make a cameo in Batman v Superman to encourage people to get excited about space. He doesn’t need to troll the internet for the lulz. He needs to demonstrate that science goes beyond just knowing how the world works and observing it from a distance. Science is about interpreting that information to draw conclusions. Even if those conclusions are wrong, it would only benefit people to learn and sharpen their critical thinking skills. Tyson could be a transformative role model by showing people even they have the potential to do these types of things — even for a field as insanely complex as astrophysics. Yes, even you can do rocket science.