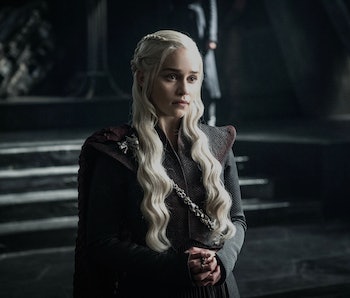 The photos mostly feature character portraits, but the background and clothing are key to parsing out what’s going on.

First and foremost, Daenerys is wearing dark Targaryen colors and long sleeves, which signifies a colder environment than Essos. In the photo with Tyrion, she looks serene, and Tyrion doesn’t look happy. He also doesn’t look stunned or murderous, which means that whoever they’re facing off-camera is probably not Queen Cersei. It’s far more likely that it’s Jon Snow. Considering the fact that previous Season 7 set reports indicate Daenerys and Jon will meet at Dragonstone, the waterside setting looks apt.

The other most intriguing photo is of Sandor Clegane, who is clad in furs and looks to be far enough North that he’s beyond the Wall. Regardless of whether the Hound fights the Mountain for Cleganebowl, it looks like the chances of a fight between the Hound and the Night’s King have increased.

Also intriguing is how Sansa is clearly not entirely finished with Petyr Baelish. They look downright scheming in their photo together. This could spell trouble for Sansa’s relationship with Jon, as Sansa and Baelish exchanged a complicated glance while everyone hailed Jon as “King in the North!” in the Season 6 finale.

Finally, Tormund is still making eyes at Brienne. Good to know the show is not dropping this crucially important plot line.

The rest of the photos are expected — Arya, Jon, and Davos are each alone, with vague backdrops; Bran and Meera are still together, Jaime and Cersei are in the Throne Room, and Sam and Gilly are reading books at the Citadel. More photos can be found here.