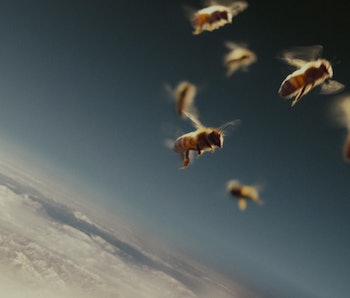 Sure, Netflix has a bevy of cheesy rom-coms, sexy capers, and superhero content. But, it can also boast a number of visually stunning science documentaries on everything from microbes to food to our personal favorite — space. Whether you need some fun facts for a cocktail party or have a dire need to debate with people on Facebook, these Netflix documentaries are sure to give you a solid dose of trivia, and then some.

7. Lo and Behold, Reveries of the Connected World

This documentary is basically a horror film about wheat, and we sure do eat a lot of it. You’ll learn about the many ways that it creeps into everyday foods, how it is treated and mass produced, and its connection with various diseases from autoimmune disorders to cancer. The documentary is to be released on Netflix on May 21.

Physics is no easy subject matter, but this documentary puts it into a perspective we can all relate to. Learn about the Large Hadron Collider — one of the biggest scientific feats known to man — and discover how one tiny atom could solve the Big Bang and unlock the mysteries of the entire universe. It’s been four years since Particle Fever debuted, and it is still driving scientific conversations. It has won over a dozen awards, including the audience choice at the 2013 Sheffield International Documentary Festival.

NASA is seeing a revival in space enthusiasm, especially when it comes to Mars. This kid-friendly documentary explores the curiosity of a new generation of future space travelers and what it will take to live on the red planet. Stunning space pics and expert interviews with NASA astronauts rank this doc at number four on the list. The movie was featured at the Sundance Film Festival and is likely to be nominated for multiple awards. You will be able to catch this on Netflix starting May 5.

This grimy documentary traverses the history of antibiotics from the discovery of penicillin in 1928 to now, when antibiotic-resistant infections seem to be growing and superbugs are surfacing across the globe. The documentary, albeit terrifying, casts these tiny microbes in a pretty adorable light, with black and white footage and microscopic images, sending an optimistic note that with the right resources we can keep up with the ever-evolving germs.

In this cinematic masterpiece, photographer James Balog offers up undeniable visual evidence of climate change. Featuring expert advice from Tad Pfeffer, a glaciologist from the Institute of Arctic and Alpine Research, who explains how the polar ice caps are melting at an accelerated rate and what that means for the fate of humanity. The doc scored prestigious awards, including an Excellence in Cinematography Award from the 2014 Sundance Film Festival.

Human survival hangs by the wings of these fuzzy insects. With stunning visuals of the Swiss countryside and the almond farms of California, More Than Honey dives into the complex world of bee colonies and all they are responsible for in the ecosystem. Learn about the science behind their behaviors, the threats to their existence, and all the beauty they create. This documentary is world renowned and has won numerous awards for best documentary at several film festivals across the globe.

More like this
Culture
Sep. 20, 2022
5 amazing sci-fi shows and movies leaving Netflix in September 2022
By Robin Bea
Entertainment
Sep. 21, 2022
You need to watch DC’s most underrated movie of all time on Netflix ASAP
By Eric Francisco
Culture
Sep. 17, 2022
You need to watch the most realistic apocalypse movie of the century on Netflix ASAP
By Jake Kleinman
Related Tags
Share: