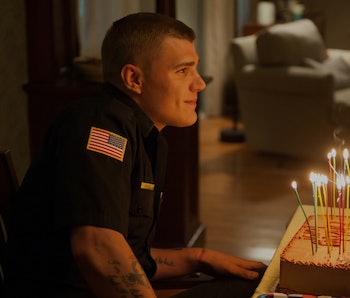 Tom Garvey, known to his family as Tommy, isn’t the most dynamic character on HBO’s existential drama The Leftovers. He hasn’t died and come back to life the way his stepfather Kevin has, he hasn’t crucified himself like Matt Jamison has, and he doesn’t constantly surprise the audience with unexpected behavior the way Nora Durst does. Yet, his storyline is the key to the emotional and psychological journey of the show.

In Season 1, the viewer meets Tommy when he’s in a weird place, to put it mildly. After the Sudden Departure — the world-shaking event in which 2 percent of the population mysteriously vanishes — he’s living on a commune and working for a con man named Holy Wayne who claims to be able to “take away pain” through magical hugs. Although the show is ambiguous about the validity of Wayne’s powers, it soon becomes clear that he’s using his mystique to impregnate underage Asian girls.

Unfortunately, because he’s stranded in a plotline separate from the other main characters, Tommy is one of the weaker parts of Season 1. He’s full of melancholia and it feels abstract to the viewer. Season 1’s penultimate flashback episode, “The Garveys At Their Best,” gives him much-needed context. Before the Sudden Departure, he was a college boy who loved his family, doted on his little sister, and had abandonment issues. He occasionally got drunk and showed up to beat down the door of his biological father’s home, resulting in an arrest or two.

The Leftovers is a science fiction show, but it uses its sci-fi premise to focus on its characters’ emotional states. It isn’t about where the vanished people went, but rather how those left behind find meaning in a world that suddenly seems meaningless. It focuses on what happens to belief systems in a reality where something senseless has happened because unlike the biblical Rapture, both righteous and wicked people disappeared in the Departure.

As the show’s Lost Boy who is slightly too adult to be considered a “boy” — the quintessential millennial — Tommy embodies the simplest thread of this ongoing thematic conversation. Kevin has a more grand and cosmic journey with his jaunts into the afterlife; Nora’s story is operatic in its mixture tragedy and intimacy, but Tommy’s is quietly ordinary. His life before the Departure was filled with everyday sadness but no grand tragedy, and his life after is concentrated around clinging to the idea of meaning in the most obvious places. If The Leftovers has a character who can be considered an “everyman,” it’s Tommy.

Season 2 is when his storyline becomes its most dynamic. He’s reunited with his mother, Laurie, who is herself fresh off a stint of abandoning her family to join a nihilistic cult in Season 1. She’s now seeking to fight the cult, but she’s using Tommy to do it. Unfortunately, she underestimates his need to find a sense of belonging and meaning. When she appropriates Holy Wayne’s story about having the power to heal people through hugs and she forces Tommy to peddle that story, it seems that he’s vulnerable to his own con.

The rest of Season 2 follows his journey to joining his mother’s old cult, drawn in by the enigmatic and sinister Meg, and his almost immediate regret of that decision. By the first episode of Season 3, when the show skips three years into the future, he’s reunited with his family and seems relatively happy. But tellingly, he’s become a police officer like his stepfather Kevin — which shows that he’s still a follower.

In a small but poignant moment in the Season 3 premiere, “The Book of Kevin,” Tommy illustrates The Leftovers and its characters in a nutshell: He’s presented with a birthday cake but hesitates over his wish, asking if he could give it away to someone else. “Anyone need anything?” he says. Nora reprimands him gently, telling him, “It’s your wish, honey.” In response, he looks vaguely panicked, as if having a wish of his own is unfathomable, as if the very idea of something intangible yet good is a burden.

The third and final season of The Leftovers is currently airing Sundays on HBO.