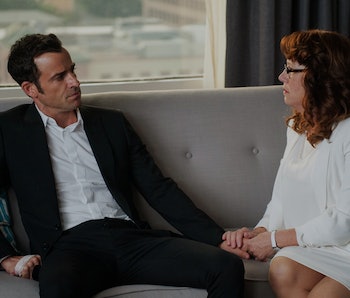 The third and final season of The Leftovers is on the horizon, bringing with it the new location of Australia and a new slew of grumpy eyebrow-furrows from Justin Theroux’s Kevin Garvey.

While the first two seasons saw the Garvey family and their friends struggle to make sense of a world in which 2 percent of the population randomly vanishes, Season 3 will see them struggle to make sense of the events of Season 2. The idyllic, Departure-free town of Jardin was disrupted by an invasion from the cult-like Guilty Remnant, helmed by Liv Tyler’s Meg. That’s not even mentioning the fact that Kevin Garvey died twice and Matt Jamison’s wife magically woke up and got pregnant. The show has always walked a fine line of magical realism, but the end of Season 2 dipped into the supernatural more than prior episodes.

When a new season of a show approaches, it’s natural to revisit old seasons — and because The Leftovers is so confusing and intricate, it demands a re-watch more than other shows. If you don’t have time to revisit the entire series, here is a sampling of the most important episodes from the first two seasons of the existential HBO drama.

The pilot episode is important to revisit because it sets up the premise of this world. Its opening remains among the most visceral and jarring sequences on television, as the audience watches a tired mother try to silence her crying baby, only to have him vanish. As the rest of the episode unfolds, it lays the groundwork for the rest of the show. We see the dysfunctional Garvey family dynamic, the Guilty Remnant, Matt Jamison’s turn to religion, and Nora Durst as the most infamously tragic woman.

Although Season 1 had a somewhat rocky start — mostly due to its relentlessly grim tone — its sixth episode was the first to show the brilliance that would remain throughout Season 2. Not only does this episode solidify Nora as one of the most gripping characters, but it cements the show’s bottle-episode format of following specific characters for an hour and its confident tone that finds tragedy and humanity within mundane settings like hotel conferences. Hotels, as it turns out, are rather important to this world.

7. “The Garveys At Their Best”

The penultimate episode of Season 1 is a must watch because it showcases the Garvey family before the events of the Sudden Departure and provides much-needed context for their current mental states. In it, Tommy is a loving family boy who sometimes gets drunk and beats down his biological father’s door. Kevin is a seemingly perfect family man who has a wandering eye and a deep sense of unease and dissatisfaction with his life. Jill is a happy go lucky teen, Laurie is a woman trying to hold her family together, Nora is frustrated with the family that will vanish on her, and crazy Kevin Senior is the most beloved man in the town.

The Season 1 finale sees Nora attempt to abandon Kevin, then change her mind when she finds baby Lily. It reunites Tommy and Laurie and divides the Garvey family into two factions: Tommy and Laurie and Kevin, Nora, and Jill. It also shows how much havoc the Guilty Remnant can wreak on a grand scale. Plus, it’s got a killer classical rendition of Metallica’s “Nothing Else Matters.”

The opening of Season 2 introduces the new setting of Jardin in the most ballsy way possible: It throws the viewer right into a new setting with a new cast of characters. The average viewer might wonder if they’re watching the right show, as the Garveys don’t even show up until forty minutes into the episode. But because the Murphys and the setting of Jardin — a town that miraculously had no Departures — is important to the rest of Season 2 and the beginning of Season 3, the Season 2 opening is a must watch.

The second episode of Season 2 further introduces the weird world of Jardin: The process of getting in and the shanty-town camps outside its fences. It also introduces the concept that geography might be important to the pattern of Departures — which will be revisited.

Season 1’s biggest struggle was finding a way to make Laurie and Tommy as compelling as the other characters. Laurie, by default, had an uphill battle as a mother who abandoned her family — which is hardly sympathetic — and as a character who was mute. Tommy, too, had an uphill battle, stranded in a thanklessly bland plot line for the duration of his run with Christine. “The Garveys at Their Best” gave the viewer crucial context on their pre-departure personalities, but it came at the end of the season. The majority of Season 1 is therefore watching Tommy and Laurie feel angst without any kind of emotional resonance, as they only had an abstract context for the viewer. The third episode of Season 3, however, cements them once and for all as characters who are every bit as complex and fascinating as Kevin and Nora.

The Season 2 finale shakes up the show’s world in a way that will resonate through Season 3. It’s revealed that the “Departed” Evie Murphy and her friends have in fact joined the Guilty Remnant, the town of Jardin falls into chaos and anarchy as fights break out, Kevin dies again, and the Garvey family comes together at last — along with John Murphy. The “idyllic” town of Jardin will not be the same after “I Live Here Now,” and the Garveys and Murphys are forever intertwined.

No episode of The Leftovers — or arguably any show — is as important as “International Assassin.” In it, Kevin visits an afterlife realm after swallowing poison and dying. The ensuing events are so well-crafted, so profound and tragic and funny, that words hardly do them justice. Just watch the episode. Craft aside, it’s brimming with Easter eggs that will be important moving forward, like Kevin Senior’s brief appearance and the outfits in Kevin’s closet.

As a bonus, for a deep dive into the nihilistic mentality of the Guilty Remnant, revisit Season 2’s Meg-centric episode “Ten Thirteen,” and to revisit Matt Jamison’s story see Season 2’s “No Room at the Inn.”