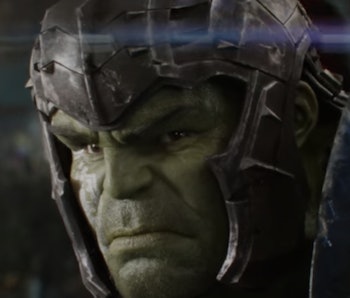 The epic and charming trailer for Thor: Ragnarok not only contained clues for what will happen next in the sprawling story of the Marvel Cinematic Universe, it also gave the first glimpse the planet Sakaar, better known as “Planet Hulk,” which may be the key to a Guardians of the Galaxy crossover.

First introduced in the 2006 Marvel Comics storyline collectively known as Planet Hulk, Sakaar is a world located in the Fornax Galaxy. After causing too much trouble on Earth, Hulk was exiled here, though the Avengers actually intended to send him to a different peaceful planet and an accident sent him to Sakaar. In the comics, Hulk arrives on Sakaar via a wormhole, which is why he was (presumably) able to traverse such a great distance. In the story of Planet Hulk Hulk is enslaved as a gladiator in a space arena, similar to what is depicted in the new trailer. But the Sakaar in Ragnarok will be a bit different. In the comic, Thor was not on this planet with the Hulk. Luckily, they get to hang out together this time.

Baddies indigenous to Sakaar (called Sakaarans) have appeared in the MCU before, specifically as troops employed by Korath the Pursuer in the first Guardians of the Galaxy. So, creatures from Sakaar briefly fought with Star-Lord and company, probably in the Andromeda Galaxy. In December, James Gunn clarified that the galaxy that is actually guarded by the Guardians of the Galaxy is the Andromeda galaxy and not our own home galaxy, the Milky Way. If the new MCU version of Sakaar is still located in the Fornax Galaxy, that’s three different galaxies we’ve got to keep track of in these movies.

Unless, of course, the events of Thor: Ragnarok claim Sakaar is in the Andromeda Galaxy. That would be really smart because if this planet is in Andromeda, it will allow Star-Lord and his friends to be in the neighborhood for a post-credits sequence. Or perhaps, vice versa? Could Thor or Hulk show up on Sakaar in Guardians of the Galaxy Vol. 2? Putting all these heroes out in space can’t be an accident.