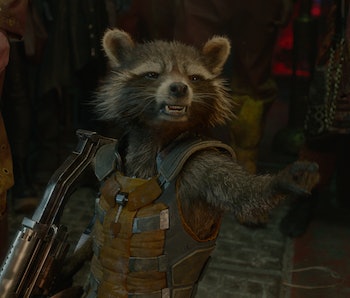 Apparently, Drax the Destroyer has famously large turds. A new clip from the upcoming Guardians of the Galaxy Vol. 2 shows that the gang is just as much of a dysfunctional family as ever and that Rocket Raccoon might be bald in the near future.

The sequel to Marvel’s 2014 Guardians origin story is gearing up to be yet another heartwarming, hilarious roadshow filled with oddball characters and another team-up of everyone’s favorite a-holes: the Guardians of the Galaxy. Marvel’s finally given another brief look into what to expect from the anticipated sequel.

In the new clip, Rocket and Star-Lord are co-piloting the Milano through enemy territory. Drax claims that only “the greatest pilot in the universe” could make it through a barrage of enemy fire and a blockade of some sort.

“Lucky for us, I am,” both Rocket and Star-Lord respond before immediately griping at each other over the title.

“What are you doing?” Peter Quill demands of Rocket, trying to take back control of the ship. “I’ve been flying this rig since I was 10 years old.”

Rocket — being, well, himself — immediately threatens Quill with planting a “turd” in his pillowcase that night.

“You put your turd in my bed, I shave you,” Quill deadpans, to which Rocket responds that it will be Drax’s, not his.

Drax laughs in his very Drax way — so boisterously that it almost sounds fake — and says that he has “famously huge turds.”

It’s Gamora who wrangles the boys in, as usual. She demands they leave the bickering to another time so they can get out of the situation they’ve suddenly found themselves in. No one takes any threats back, though, so there’s honestly a good chance they’ll carry through with them.

Guardians of the Galaxy Vol. 2 premieres May 5.