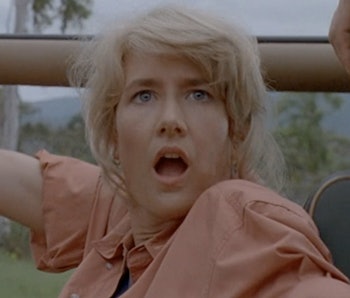 Laura Dern’s mysterious character in Star Wars: The Last Jedi might be an admiral with the name “Holdo,” and she’ll be entirely unlike any previous Admiral seen in Star Wars before. In fact, if rumors are to be believed, she’ll be dressed like a space flapper.

In a rumor published on Making Star Wars on April 8, alleged sources claim “people around the production” have referred to Dern’s character as “Admiral Holdo.” The report claims that Admiral Holdo will be dressed in “a long mauve regal gown with a short cape that hangs down in back with a concealed laser pistol.” It goes on to say, “She has metallic braces around her wrists. Her pink hair is curled with a flapper vibe to it but it’s not incredibly short or anything.”

It’s unclear how seriously the descriptions can be taken, seeing as there is no source for them whatsoever. But, the pink hair and generally ostentatious look does correlate with older rumors that Dern’s character will look like Effie Trinket from The Hunger Games.

If Admiral Holdo does have anything in common with Effie Trinket, here’s to hoping its limited to just the fashion statements.