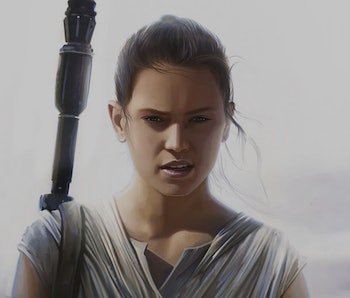 Rey will likely do more than just spin her lightsaber in the first trailer for Star Wars: Episode VIII — The Last Jedi. One way or another, the first teaser, trailer, or preview for the film is coming this week, and early rumors suggest it will be longer than a teaser and will have a “full trailer feel.”

On Monday, the Twitter account for the fan rumor site Star Wars News.Net asserted that the first Last Jedi trailer won’t be “just a teaser.” While a trailer is almost certainly coming this week, it’s still unclear when it will happen. While it’s possible the first trailer for The Last Jedi could happen as early as Thursday, April 13 during the 40th Anniversary panel at Star Wars Celebration, the good money now seems be on a big “preview” being shown on Friday, April 14 during the official The Last Jedi panel.

As with the first length trailer for The Force Awakens back in 2015 (“Chewie, we’re home.”) this expected to be live-streamed on the Star Wars YouTube channel from the convention.

Historically, the fans have headed into the last two Star Wars Celebrations already having seen at least one teaser trailer for an upcoming Star Wars movie. In April 2015, there had already been one brief teaser for the Force Awakens, and in July 2016, there had also already been a Rogue One teaser. In a sense, this means the 2017 Star Wars Celebration has a little catching up to do in terms of dropping footage for The Last Jedi. Conceivably, this means there could be The Last Jedi footage shown during the 40th anniversary panel on Thursday and also a longer trailer on Friday. A quick glimpse at the Han Solo movie also isn’t out of the question.

No matter what, by the end of the week, fans everywhere will finally see Luke Skywalker, General Leia, Rey, Finn, Chewbacca and Kylo Ren again for the first time in two years. Star Wars Celebration kicks off on Thursday, April 13. The 40th anniversary panel will start at 11 a.m. Eastern.