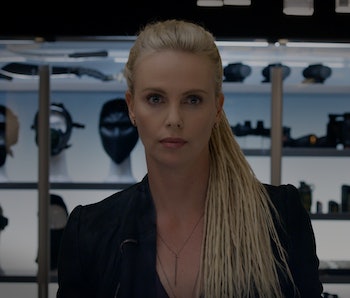 The most frightening thing about Charlize Theron’s newest Fast & Furious baddie isn’t that she’s a powerful female villain or a brilliant hacker who can turn self-driving cars against the world, it’s that she can tear this goddamn family apart.

“Some of her actions in this film have definitely devastated and loosened the foundation of what this franchise was about,” Theron promised in an interview with Entertainment Weekly — and this franchise is about family. Charlize Theron said her character “loves the challenge” of trying to break the code of a character like Dom.

In just about every trailer we’ve seen thus far, Michelle Rodriguez’s Letty grimaces angrily at Dom after an explosion and disgustedly says, “You’re gonna turn your back on family!?” His only reply is to make out with Cipher. Whereas previous villains have been blunt instruments of destruction — the zenith of that happening when Jason Statham’s Deckard Shaw drives a reinforced car directly into Dom’s in Furious 7 — Cipher’s villainy subversively undermines and controls other people and instruments rather than fights them directly. To Dom, she says, “Your team is about to go up against the only thing they can’t handle: you.” What better weapon of destruction is there than the Family’s Alpha?

So who exactly is this villain? Spoilers for The Fate and the Furious follow.

She Somehow Gets Dom to Turn His Back on His Family

It’s unclear whether Dom is straight-up brainwashed or otherwise brain-hacked by Cipher, but she is somehow able to get him to do her bidding. It might just be an old-fashioned case of blackmail, but we’re not sure what she could possibly have on Dom that would make him turn his back on everything he holds dear. The fact remains that he’s willing to fight the members of his former crew with seemingly little remorse, or at the very least, intensely subdued remorse.

The big spectacle in Fast 8 will be a scene, shown in trailers, in which Cipher hacks into a ton of A.I. cars in New York City, saying, “It’s zombie time” as she does so. She weaponizes these zombie cars to chase the crew and commit car suicide by driving out of parking spaces.

She’s the Mastermind Behind Fast & Furious 6 and Furious 7

Cipher’s motives are wrapped up deeply in a bit of a retconned need for revenge. In Fast & Furious 6, rogue British Special Forces Officer Owen Shaw works with an amnesiac Letty to steal components to build a Nightshade device, which can supposedly disable electric power in entire regions, rendering even military technology vulnerable. And in Furious 7, the team has to duke it out with Deckard Shaw and mercenary Mose Jakande to claim God’s Eye, a device that can aggregate video footage and satellite data to track — and potentially kill — any person on the planet.

As it turns out, Cipher hired both Owen Shaw and Mose Jakande (Deckard is just there for revenge) to procure these incredibly dangerous devices for her, plans that were foiled by the Fast Fam in each movie. Now, she’s decided to take center stage, manipulating Dom in the process to do her dirty work because he and his crew messed up everything for her.

You’ll have to see The Fate of the Furious when it crashes into theaters April 14 to see if Dom can be redeemed and what other hacks Cipher has up her sleeve.