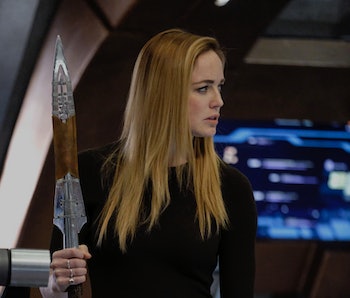 Last year, Legends of Tomorrow ended its first season in a coup that toppled the Time Masters. For a series about time travel, it was a suitably big but impersonal goal with a functional, straightforward plot. The Season 2 finale of the DC ensemble series, “Aruba” alters course by presenting an ingenious scenario where the stakes aren’t only bigger and more important but also feel more personal.

Fresh from their loss (and loss of Vixen) in “Doomworld” 2017, the Legends come up with a characteristically stupid plan that breaks the first rule of time travel to achieve a more ambitious goal. To take the Spear of Destiny from the Legion of Doom, the Legends revisit their last big stop: the battlefield of World War I, where they spilled Christ’s blood and lost the Spear. If they can avoid their past selves, maybe time won’t fold onto itself. This being Legends of Tomorrow of course, they do, and time folds.

Although the crisscrossing of two sets of Legends and differentiating them gets dizzying despite the show’s best efforts (a more visible costume change would have helped), the sheer spectacle, personal stakes, neat cameos, and novel scenario proves the old dog of time travel sci-fi can still learn new tricks.

There’s no easy of way of saying this so let’s just be blunt: Everyone dies in Legends of Tomorrow. While the show actually undoes it all because of time remnants and some nonsense, this episode will show you Eobard Thawne (Matt Letscher) rip out Ray Palmer’s (Brandon Routh) heart without hesitating. But most characters who die in the finale live, and in any other show, reversing those decisions would be unforgivable. But with time travel and rewriting reality built-in to the show’s DNA, it’s not only forgivable but absolutely logical.

But the dead still stay dead. Sara (Caity Lotz), who finally came to grips with Damien Darhk’s (Neal McDonough) murder of Laurel (Katie Cassidy, who makes a stunning cameo) ended exactly how it should. Darhk will always get what’s coming to him, and as Thawne alluded to in “Doomworld,” there are some fates worse than death.

Speaking of Sara, Season 2 of Legends of Tomorrow was hers, and Rip Hunter (Arthur Darvill) has officially handed the Waverider to her in surprisingly subdued fashion. It’s maybe not satisfying to everyone given Rip’s importance dating back to the beginning. But it also would be way un-Rip Hunter to make a big deal out of it. Forever a nomad, the Englishman makes an Irish goodbye to the show. We’ll surely see him again.

Season 2 also gave a significant attention to Mick (Dominic Purcell), who despite having been made an inhuman killer by the Time Masters still acts like a meathead in headlights (“Aruba” refers to Mick’s desire to chill back from the premiere). His ol’ buddy Leonard Snart (Wentworth Miller) was less involved with the Legion of Doom than fans assumed, but his relationship with the time-displaced Captain Cold still felt like an evolution, even if it’s more clear than ever Snart is dead as can be. The quiet look Mick shoots Snart after leaving him in 2014 Central City speaks volumes.

Legends of Tomorrow effortlessly shows how well comic books have translated to TV. Although it has continuity in an exhaustive universe of interconnected narratives, it can still exist competently on its own while still being a compelling ensemble series reminiscent of ‘80s and ‘90s sci-fi. It doesn’t matter how often Legends of Tomorrow rewrites history, be it during World War I or in an alternate, Back to the Future II-style 2017 dystopia. Let’s not believe The Goonies, which Sara quotes in the end: Legends do die. But we’re happy to see them live and die completely on their own.

More like this
Culture
8.5.2022 10:30 AM
How Netflix's epic Sandman finale sets up Season 2
By Mónica Marie Zorrilla
Entertainment
8.9.2022 1:00 PM
Has your favorite HBO Max show been canceled? The fate of 9 sci-fi series revealed
By Robin Bea
Entertainment
8.9.2022 12:15 PM
90 Day Fiancé could actually save the DCEU, not doom it — here’s why
By Dais Johnston
Related Tags
Share: