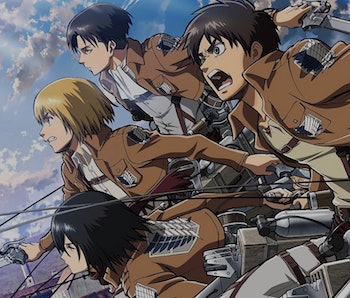 Season 2 of Attack on Titan premiered on Saturday, April 1, to ruin peoples’ weekends with unnecessary emotions. The much-anticipated second season of the hit anime, based on the manga series of the same name by Hajime Isayama, is finally here. And because we know you want to stay on top of it and, possibly, remind yourself why you love the series so much, we’ve rounded up the easiest ways to watch the Season 2 premiere and the entirety of Season 1.

Attack on Titan, for those not in the know, follows the story of Eren Jaeger. After the death of his mother at the hands of a Titan, a race of monstrous, skyscraper-sized beasts who eat humans for seemingly no reason, Eren joins the military to fight the Titans. And while humanity lives behind enormous walls to protect themselves from the Titans, very few things are peaceful.

The plot synopsis for Season 2 of Attack on Titan is:

Eren Jaeger swore to wipe out every last Titan, but in a battle for his life he wound up becoming the thing he hates most. With his new powers, he fights for humanity’s freedom facing the monsters that threaten his home. After a bittersweet victory against the Female Titan, Eren finds no time to rest—a horde of Titans is approaching Wall Rose and the battle for humanity continues!

Here are the four simplest ways to stream Attack on Titan’s Season 2 premiere and Season 1 of the hit show.

While Netflix doesn’t have Season 2 of Attack on Titan up yet, it’s an easy way to binge through Season 1.

Season 2 of Attack on Titan is now available to stream online.