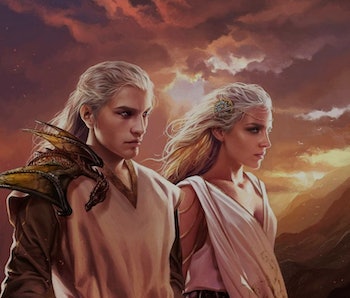 One of the most intriguing aspects of the Game of Thrones universe is how much of the story happens offscreen. Many of the most crucial events that have shaped this narrative haven’t even been shown. In fact, Season 6 was the first to pull back that curtain in the form of Bran’s visions of the Tower of Joy. But because Season 6 and green dreams made the past fair game, it stands to reason that more will follow in Season 7. Here are five important characters that will be crucial to Season 7 — whether or not they appear onscreen.

Rhaegar Targaryen is Daenerys’s deceased older brother and Jon Snow’s true father. He was known as a sensitive soul — which is surprising, as he’s the son of the Mad King. And yet his love for Lyanna Stark sparked a war that ultimately led to both their deaths and the current chaotic political situation in Westeros. If Rhaegar was still alive, Daenerys and Jon would both be living vastly different lives. Season 7 could show him onscreen through Bran’s visions. Even if it doesn’t, he’s sure to come up again, as Jon and Dany will finally meet. Everything ties back to Rhaegar.

Howland Reed appeared onscreen for the first time in Season 6. In Bran Stark’s vision of the Tower of Joy, Reed was Ned Stark’s companion, who helped him dishonorably kill Ser Arthur Dayne. However, Reed has yet to appear onscreen in the present day as an adult. He’s crucial to the narrative because he might very well be the only living person who knows of Jon’s parentage. He’s therefore connected to Jon’s past in an important, and potentially world-altering, way. Even if he doesn’t appear onscreen, he too will shape the narrative.

Jim Broadbent, who played Professor Slughorn in Harry Potter, will appear in Season 7 as new character Maester Marwyn. He’ll be an archmaester, who Sam Tarly encounters at the Citadel. We can therefore expect him to help Sam learn crucial plot-relevant information, like how to cure greyscale or how to defeat or unmake White Walkers.

Joanna Lannister is Tyrion, Jaime, and Cersei’s mother, who died giving birth to Tyrion. One would think she’s removed from the story, but there is a prominent fan theory that Tyrion is secretly a Targaryen. The Mad King was infatuated with Joanna, and according to the theory he is Tyrion’s true father. If the theory comes true, it will come to light in Season 7 — and Joanna Lannister will abruptly become more important. If the theory is not true, Joanna’s legacy still shapes the story as Jaime and Cersei’s relationship fractures.

The Mad King has technically appeared onscreen once, in a blink-and-you-miss-it montage of Bran Stark’s visions. He’s unquestionably the most important offscreen character who has shaped the events of the story. He’ll continue to be important, particularly if Jon Snow learns of his parentage and must grapple with his grandfather’s uneasy legacy.

More like this
Entertainment
6.21.2022 1:00 AM
Game of Thrones sequel could ruin the best part of the series finale
By Alex Welch
Entertainment
6.28.2022 12:00 PM
Westworld Season 4 theory may reveal a shocking Dolores twist
By Mónica Marie Zorrilla
Entertainment
6.16.2022 1:00 PM
How Rings of Power expands Tolkien’s world by “honoring his work”
By Eric Francisco
Related Tags
Share: