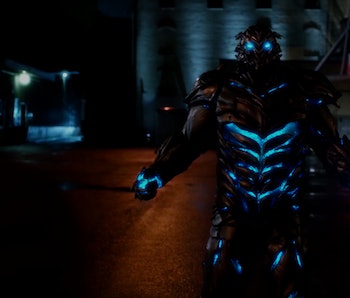 Savitar is running wild on The Flash. While S.T.A.R. Labs is struggling to keep up with their new foe, the so-called “God of Speed” has left behind some destruction in his path. Savitar has masterfully kept his identity withheld, but he’s also revealed prophecies of which several have already come true. The current score for Team Flash vs. Savitar is two for three, leaving just one more prophecy left to complete. Season 3 of The Flash is racing to the end.

The prophecies Savitar revealed to Team Flash have cast a looming shadow over the back half of Season 3. They are as follows:

How ominous! And two have already come true. One has betrayed Team Flash and one has suffered a fate worse than death. Savitar made these sound way more severe than they actually ended up being, but still. They’ve become true and that only means his murder of Iris (Candace Patton) remains fated to happen.

The prophecies aren’t the only things guaranteeing Savitar’s victory. Central City has had to undergo gorilla attacks and restaurant reopenings, which signal truth to Savitar’s warnings. The Flash has yet to witness the return of Killer Frost and the closing of the S.T.A.R. Labs museum, however.

“One will betray you”: Caitlin Snow (Danielle Panabaker) retained a piece of the Philosopher’s Stone and kept it hidden from everyone else. Hoping to use it to erase her Killer Frost alter-ego, Caitlin kept her piece of the stone until she could figure out how to use it. But her rainy day project backfired, and Savitar manipulated Wally West into using the stone to resurrect Savitar out of the Speed Force. While Caitlin didn’t betray her team the way, say, Evelyn Sharp (Madison McLaughlin) did on Arrow, her secret still cost them dearly.

And if Killer Frost is meant to be “at large” as the news reports the night Iris dies, then there’s some real trouble on the horizon.

“One will suffer a fate worse than death”: Wally West’s imprisonment in the Speed Force is certainly a fate worse than death. Doomed to relive his mother’s death over and over again for eternity, Wally West is scarred by his time in the Speed Force, even after he was successfully rescued. But perhaps it wasn’t even Wally who Savitar was talking about. Savitar could very well have been talking about Jay Garrick (John Wesley Shipp).

While Garrick helped Barry rescue Wally out of the Speed Force, a speedster still had to stay behind (for reasons that are still very unclear). Garrick volunteered, essentially dooming himself to the Speed Force. He’s still technically suffering, but Barry is determined to get him out as fast as he can.

“One shall fall”: It’s strongly implied by Savitar that Iris will be the one to “fall.” It’s her death that Team Flash is working their asses off to prevent, but if Savitar has his way, then Iris shall fall. He’s even sorry it has to be her, but the Flash created Savitar. How and why, the show hasn’t revealed. But as the show races to the end of its third season, anxious fans will know soon enough.

The Flash airs Tuesday nights on The CW.