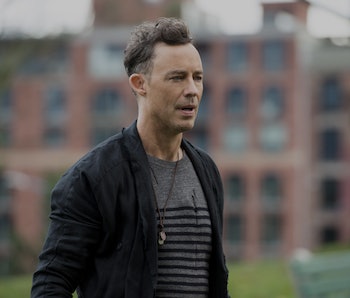 The new monster speedster on The Flash is yet another bad guy withholding his identity. While these kinds of mysteries are becoming old hat for the acclaimed CW series, The Flash is keeping it fresh by populating S.T.A.R. Labs with candidates who might become Savitar. One of the most popular among them all is the theory that H.R. (Tom Cavanagh), the Earth-19 doppelganger of Harrison Wells, is (or will become) Savitar.

H.R. burst onto The Flash to replace the stern but fair Harrison Wells of Earth-2, who returned to his parallel Earth early in Season 3. The team, in need a mentor, sent out a call for a new Dr. Wells and found H.R. from Earth-19. But here’s the kicker: H.R. ain’t no smarty. H.R. was a hack on his Earth who led his S.T.A.R. Labs more creatively than he did scientifically. The guy barely knows how to use a computer, but he inspired his team (and his Earth’s Flash) and wanted to find a new life on another Earth. He was given a chance to prove himself on Earth-1, and so far, it’s worked out.

But did S.T.A.R. Labs actually recruit the person who would be Savitar? A number of theories make the connection between the two characters.

For one thing, H.R. — who is distinctly different from the two previous versions of Harrison Wells, carrying a more relaxed ‘tude than his predecessors — is obsessed with being the hero of his own story. He’s a best-selling novelist on Earth-19, and H.R. traveled to Earth-1 hoping to find inspiration for his next best-seller. Savitar shares this arrogance, and has proclaimed himself as his own hero and that Barry Allen (Grant Gustin) is the villain. “From my perspective,” Savitar says to Barry in episode 15, “you’re the Big Bad.” Savitar also fancies himself as a god, and has expressly stated: “I love a good myth.”

What’s unquestionable about Savitar is that he hails from the future. He’s dropped several unambiguous hints to this, even telling Barry: “I am the future, Flash.” (He may also be referring to the fact he’s the actual Future Flash, another plausible theory.) So Savitar knows what’s up in the near future for S.T.A.R. Labs, which he reveals to H.R.: “You know the sad thing is you live. You survive my wrath. The coward. Irony.”

That line might be enough to shut down any theory positing H.R. as Savitar, but what if Savitar is implying H.R. becomes Savitar, thereby “surviving” and evolving into a god?

The last point that various fans are pointing out is that H.R. and Savitar share a bizarre habit: Both call Wally West, aka Kid Flash, “Wallace.” While everyone calls him Wally, “Wallace” is an affectionate name H.R. calls Wally much of the time. But why does Savitar call him “Wallace” too? It might be Savitar’s intimidating formality, or it could be a habit that never died.

H.R. is a constant presence in all theories speculating Savitar. Until The Flash properly reveals who’s under his mask, these theories will continue to run rampant.