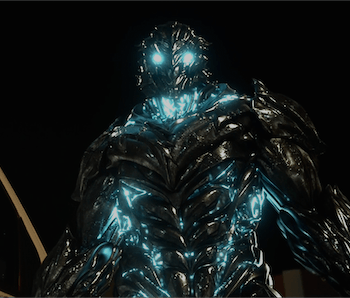 The Flash may be the fastest man alive, but his TV show sure is taking its sweet time revealing the identity of this season’s Big Bad, the so-called god of speed, Savitar. In an interview on Monday, several members of the show’s cast and crew teased a couple additional details about who Savitar really is, and they seem to hint that there might just be something to a popular fan theory.

“Barry is going to realize that the hunt for Savitar’s identity might not lie in the present, which will take the show in a fun and interesting direction,” executive producer Andrew Kreisberg told Entertainment Weekly.

The idea that Savitar is a future version of a familiar Flash face is a popular one with fans, given how often Team Flash hops from one timeline to another. Right now, the most popular theory among fans is that Savitar is none other than Barry Allen himself, only from the future. There’s some comics precedent for it, and it would certainly be a big twist.

The showrunners have hinted in the past that this reveal isn’t going to be like any they’ve done in the past, and an evil, future version of the main character fits the bill. Executive producer Aaron Helbing told EW that the truth of Savitar’s identity will have big ramifications for Team Flash. “It impacts everybody and makes them question everything that they’ve known for the past three seasons,” he said.

Well, everyone on Team Flash has known Barry for three seasons. Seeing his future potential to be evil would change everything indeed.

“So hopefully we’ve laid the groundwork for it all to make sense not just in the moment, but hopefully you look back and you realize how important it was for Barry to face this particular villain in his journey as a hero and how this season ties into all the others,” Kreisberg told EW.

The Flash airs at 8 p.m. Eastern on Tuesdays on The CW.