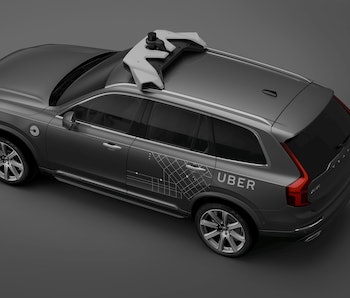 On Friday, pictures of a crashed autonomous Uber vehicle surfaced on Twitter. In the photos, taken by Fresco News user Mark Beach, you can see the Volvo XC90 flipped onto its passenger side. The car lies next to at least one other vehicle that shows signs of a crash. From the looks of the two cars, the impact was not minor.

The crash took place in Tempe, Arizona, where Uber has been testing its autonomous vehicles.

The Uber vehicle did not cause the accident, and there were no serious injuries, the Tempe police told Bloomberg News.

“There was a person behind the wheel [of the Uber vehicle],” the Tempe police spokesperson told Bloomberg. “It is uncertain at this time if they were controlling the vehicle at the time of the collision.”

An Uber spokesperson confirmed the vehicle was in self driving mode during the crash, but no one was seriously hurt. Uber says its vehicles in Arizona are grounded while it continues to investigate the crash.

This incident comes at a difficult moment for Uber, as the past few months have brought the company controversy after controversy, including a driver compensation lawsuit, malfunctioning driverless cars, and revelations surrounding shady police-avoidance software.

Besides the unfortunate optics of having one of the company’s driverless vehicles involved in a crash, it looks like the company is in the clear on this one. And as far as public comment goes, Uber is staying rather tight-lipped at the moment. The company did confirm, though, that the car did not have a fare in it when it crashed.

“We are continuing to look into this incident and can confirm we had no backseat passengers in the vehicle,” an Uber spokesperson offered Inverse in a statement.

More like this
Innovation
Oct. 2, 2022
EV ownership has a racial gap — one major change could bridge the divide
By Andrea Marpillero-Colomina and The Conversation
Innovation
Oct. 2, 2022
Want a better relationship with your dog? Neuroscientists say these 7 factors are key
By Tara Yarlagadda
Innovation
Sep. 29, 2022
Scientists have created a mechanical womb that can grow life in the lab
By Miriam Fauzia
Related Tags
Share: