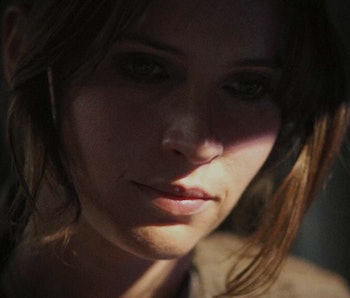 When Lyra Erso gave her daughter Jyn her precious kyber crystal necklace, there was a secret message hidden on it. The word “Force” is spelled out in Aurebesh.

On Friday, the digital release of Rogue One: A Star Wars Story included several behind-the-scenes extras. In the extra feature titled Rogue Connections, it’s revealed there were words written on Jyn’s crystal in Aurebesh, the language of Star Wars. Chronologically, this famous outer space alphabet wasn’t established as the “real” language of Star Wars until after the special edition releases of the original films in 1997. Prior to that, words like “tractor beam” were spelled out in English. Because characters in Star Wars are so seldom caught reading, some fans (including, somewhat notoriously, the author of this article) worry that poorer, under-educated characters may not be entirely literate.

But this notion seems unlikely in the case of Jyn Erso, mostly because prior to going into hiding, her family was fairly well-off, and she grew up in a ritzy neighborhood of the planet Coruscant. So, Jyn probably knows her Aurebesh backwards and forwards, meaning the secret writing on this crystal was only secret because it wasn’t made clear to the audience.

Later in the film, Cassian and Jyn both read off a bunch of names for secret Imperial projects, though the audience never sees those code words flashing in Aurebesh letters. But, it stands to reason that since Cassian is a spy, he knows his alphabet pretty well, too.

Rogue One is out today for digital download from multiple platforms, including Google Play, iTunes, Vudu, and others. It will release on Blu-ray and DVD on April 4.