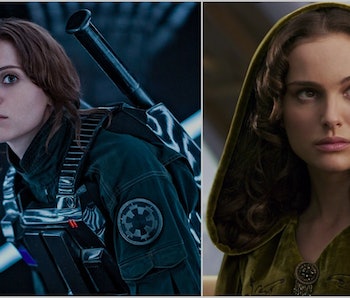 If Jyn Erso took the elevator up to the penthouse of her childhood Coruscant apartment complex she might have been able to meet Anakin Skywalker and Padme Amidala.

If you remember, Rogue One features a whopping two flashback sequences.

The one that opens the film shows Jyn and her parents, Galen and Lyra, in hiding on the remote planet of Lah’mu. But later when she’s aboard the U-wing with Cassian and K-2SO on their way to Jedha she has a dream of her childhood before the Ersos had to go into hiding. Her dad is decked out in what looks like a spiffy uniform along with Krennic in a swanky apartment on Coruscant. As Twitter user @manyymedia points out, the skyline in the background is the same one seen outside Padme’s apartment in Revenge of the Sith, and might even be from the perspective of the same building.

If you do a little sleuthing in the convoluted Star Wars timeline, it seems to suggest that the Ersos and Padme could have been there at the same time.

The Rogue One prequel novel, Catalyst, which features Galen and his family’s Imperial drama with Krennic on Coruscant, takes place a year after Attack of the Clones when Padme sets up shop in her senatorial apartment building on Coruscant. She’s still there three years later when the events of Revenge of the Sith occur.

Here’s a look at the nighttime top-floor view. If you look past the very mopey Anakin Skywalker on the left, the same three-spired building can be seen in the distance:

Since this is the Star Wars saga — which, don’t forget, features the baffling coincidence of Darth Vader confronting his daughter above his childhood planet where his mentor and exiled son just happen to be in hiding — this is nothing too ridiculous.

It could also just mean that a Rogue One production designer pulled out a matte painting they had available for this one background scene and stuck it in the movie.

Either way, the six degrees of Star Wars means that Jyn probably shared a building with the wife of the guy who Force-choked the guy who forced her father into indentured servitude.