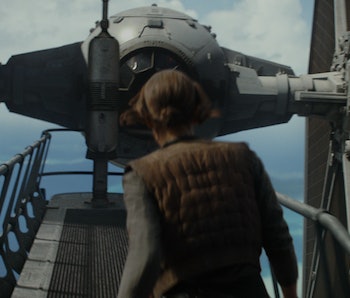 We’re definitely going to be meeting Jyn Erso’s mother in Rogue One: A Star Wars Story, but it will be in a way that is totally new to the established storytelling conventions of Star Wars films.

In an unprecedented move for the Star Wars universe, Rogue One might be treating us to conventional flashbacks that take us beyond “a long time ago.” We’re likely going to glean a better understanding of the Erso family’s relationship to the Empire, the role of Jyn Erso’s father, Galen, in the creation of the Death Star, and the catalyst for Jyn’s involvement in the Rebel plot to steal the plans for the devastating weapon.

It was always clear that Galen (played by Mads Mikkelsen) was going to be a part of the Rogue One story, but whether or not Jyn’s mother might factor into the film was largely left up to rumor until an interview with Valene Kane confirmed that she’s playing Jyn’s mother, Lyra Erso, in Rogue One.

Lyra’s involvement likely won’t be in the present, which makes sense, as Kane (who you might know from The Fall) isn’t quite old enough to have a 20-something-ish daughter. So, it’s a good bet that Kanes role will be left to flashback(s), which checks out with Mads Mikkelsen’s previous comments that the film will “jump around” in time.

A big part of this family plot is going to be the way in which the Erso family came to find itself in troubled waters with the Empire. Plot details from Catalyst, the Rogue One tie-in novel, reveal that the Erso family was indebted to Orson Krennic, and that debt led Galen Erso to help the Empire ruin lives, whether he knew it or not.

Is Lyra Erso dead? Is she missing? Is there another reason why the actress who’s been cast to play her is too young to portray a movie-present Lyra? Per the modus operandi for Star Wars and Disney films, information is scant, but it won’t be long now until we have answers. Rogue One arrives in theaters December 16.