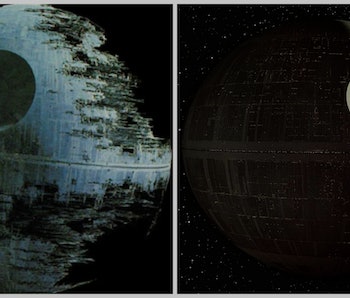 Though the Death Star was the Empire’s ultimate weapon — such a good idea that they built another one — it turns out they had several other secret projects up their evil sleeves, too.

Mild spoiler alert for Rogue One: A Star Wars Story.

Now that Rogue One out in theaters, the endless analysis and dissecting can begin. One very interesting scene toward the climax of the film finds Cassian Andor and Jyn Erso trying to locate the psychical copy of the Death Star plans, amid a bunch of other files. It’s kind of a retro futuristic version of the warehouse at the end of Raiders of the Lost Ark: seemingly rows and rows of mysterious black ops projects, all of which could be just as scary as the Death Star.

In the scene, all the projects have codenames, and the way Jyn is able to find the Death Star is by recognizing the word “Stardust.” It all happens pretty fast, so it’s tricky to catch all the other codenames Cassian says after just one viewing of the movie.

But, the other projects all had crazy names: “Pax Aurora,”” Black Saber” and another one might that have been “Ord Mantell.” What could this mean?

In the old Expanded Universe/Legacy novels, “Darksaber” was a sleeker Death Star-like weapon. But a “Darksaber” was also a lightsaber-esque hand-to-hand weapon favored by the Mandalorians. Meanwhile, Ord Mantell was a planet Han Solo references briefly in The Empire Strikes Back as a place where he “ran into” a bounty hunter. These things could have been directly referenced on purpose, or these could be different superweapons entirely.

With the destruction of Imperial base on Scarif, most of the data for these secret projects was probably lost forever. Still, it’s interesting to think that the Empire had all sorts of other plans that weren’t the Death Star. What other terrible ways are there to rule the galaxy?

Rogue One is out on wide release now.