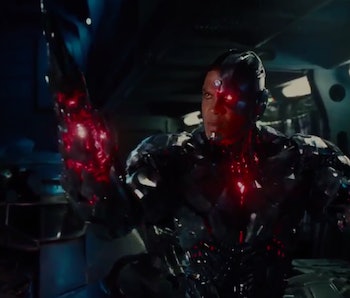 Cyborg’s got easily the most physically painful superhero origin story out there, especially amongst the Justice Leaguers, but not even that is going to stop him from entering the fray for these 15-second teasers previewing the full Justice League trailer that’s set to drop on Saturday.

In the comics, Victor Stone was a highly intelligent, all-star high school football player with brilliant parents working for S.T.A.R. Labs, and when an incident involving an interdimensional portal destroys most of his body, his father is able to use crazy science to build him a new body.

The teaser shows a 100-percent human Victor walking confidently in a letterman jacket, suggesting that we’ll either see pre-accident flashbacks in the movie or that the events of the film take place during his transformation, which seems unlikely given what little we saw of him in Batman v Superman. In the next shot, he’s sporting his iconic glowing red robotic eye, hiding in the shadows. The last clips show off some of Cyborg’s full firepower. He cocks his arm gun and uses some sort of concussion blast to save some people from falling debris.

Cyborg will make appearances in various DC films before his solo debut, which is due out on April 3, 2020. With a vast majority of his human body gone, retaining his humanity is bound to be a constant struggle.