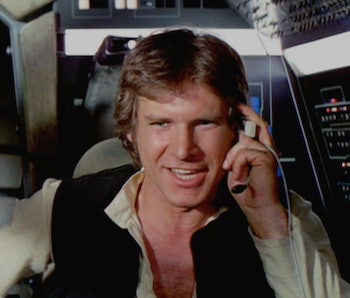 The exact time period the Han Solo movie will cover has been revealed: The exploits of the young smuggler will begin when he’s 18 years old and show him mature into a man of 24 by the end of the film.

Speaking at USC on Thursday, Disney CEO Bob Iger spoke about renewing his contract with the studio. Speaking to The Hollywood Reporter, he also clarified plot aspects of both The Last Jedi and the upcoming Han Solo movie. Sources present for the USC speech say Iger made clear that the Han Solo movie “will follow him from age 18 through 24 and show him finding the Falcon, meeting Chewbacca, and getting his name.”

Meeting Chewbacca and getting ownership of the Millennium Falcon doesn’t seem super surprising to most fans, but the alleged tidbit about “getting his name,” is tantalizing. If read correctly, this implies Han Solo’s name hasn’t always been Han Solo, making him the Great Gatsby of a galaxy far, far away.

The time period of the film is also interesting. If Han is 30 in the original film, going back to a time when he is 18 years old will put him smack in the middle of the earliest days of the Empire. In other words, only a few years after the opening prologue of Rogue One. And other than Rogue One, this seems to be the first Star Wars movie in which a significant amount of time will pass during the film. In this instance, six years of Han Solo’s life.

Star Wars.com hasn’t updated the offical synopsis for the Han Solo movie to reflect these comments from Iger. At present, the standalone film remains untitled.