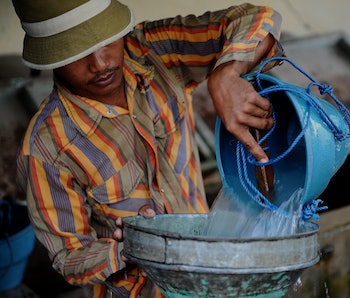 By Jennifer Weeks, The Conversation

Editor’s note: The following is a roundup of archival stories.

Every year on March 22, the United Nations observes World Water Day to highlight the global water crisis. This year, the focus is on reducing and reusing wastewater from homes, farms, factories, and other sources.

Ensuring access to water and sanitation for all people is one of the U.N.’s Sustainable Development Goals, adopted in 2015 by the United States and 192 other nations. Specifically, the goals call on member nations to

Read on to learn about what it will take to meet this goal, and some potential solutions.

The Scourge of Sewage

Untreated sewage is a major threat to human health. According to the World Health Organization, unsafe water, poor sanitation, and hygiene cause approximately 842,000 deaths each year, and 1.8 billion people use drinking water sources contaminated with feces.

Contamination in Rio de Janeiro’s harbors and marinas, which were settings for aquatic events during the 2016 Summer Olympic Games, spotlighted the serious health risks associated with exposure to sewage. According to Joan Rose, laboratory director and principal investigator in water research at Michigan State University, human waste contains a wide range of bacteria, viruses and other pathogens.

“Around the world, those who swim in and boat on or use polluted surface waters for hygienic purposes such as bathing, cleaning clothes, washing dishes, or even for religious purposes are all at risk of diarrhea, respiratory disease, skin, eye, ear, and nose infections.”

Rose’s research group has found some of those agents in waterways around Chicago that received treated wastewater. Reducing the risk to human health will require better testing methods, more monitoring, and more effective water treatment methods. These types of contamination are actually quite common, notes Tufts University’s civil and environmental engineering assistant professor Daniele Lantagne, and point to the need to develop innovative ways to treat wastewater.

Many people in developing countries do not have access to modern drinking water or sanitation systems. In Haiti, a major cholera outbreak occurred after a devastating earthquake in 2010. Now cholera appears to have become endemic there. Fecal contamination was the original route by which cholera spread, but now reservoirs of bacteria have become established throughout Haiti, even in uncontaminated surface water sources.

Since little has been done to improve drinking water treatment in Haiti since the earthquake, University of Florida research scientist Alex Weppelmann predicts that “mass vaccination with oral cholera vaccines might be the only intervention available” to stop cholera transmission, an effort that would require major financial and logistical support from the international community.

Money is not the only roadblock that prevents communities from solving water-related problems. In its annual survey of U.S. mayors, the Boston University Initiative on Cities found last year that infrastructure repairs — including upgrades to wastewater and stormwater systems — were by far the largest headache for mayors from a broad swath of cities. Money for these projects is tight, but fractured relationships between federal, state, and city agencies also make it hard for mayors to advance projects their cities desperately need.

In developing nations, water issues are colored by gender roles. Millions of women worldwide spend hours fetching water for drinking, cooking, bathing, and other household needs. And when family members get sick from consuming tainted water, women spend hours caring for them.

“An insufficient supply of safe and accessible water poses extra risks and challenges for women and girls,”

Innovations in Treatment and Reuse

Farms produce a lot of wastewater, especially runoff from irrigated fields. Excess fertilizer feeds into streams, rivers, and bays, creating large blooms of algae. When the algae die and decompose, they deplete waters of oxygen, creating “dead zones” in important areas like the Gulf of Mexico and the Chesapeake Bay.

One potential solution to nutrient runoff is filtering it through bioreactors — trenches filled with wood chips — which are colonized by native bacteria from the surrounding soil. The bacteria use carbon as a food source, explains research assistant professor Laura Christianson of the University of Illinois. When nitrate-loaded water flows through the trenches, “The bacteria ‘eat’ the carbon in the wood chips, ‘inhale’ the nitrate in the water, and ‘exhale’ nitrogen gas,” reducing nitrogen pollution in the water by up to 90 percent. Researchers are building and testing large bioreactors to put this strategy into practice across the Midwest.

Many communities in water-stressed areas are considering ways to reuse water after it has been appropriately treated. A 2016 study by the National Academies of Sciences, Engineering and Medicine evaluated uses for so-called graywater from bathroom sinks, showers, bathtubs, clothes washers, and laundry sinks, but not from toilets or kitchens. It concluded that using graywater for purposes other than drinking, such as flushing toilets, could expand local water supplies and provide a drought-resistant year-round local water source.

“Graywater reuse for toilet flushing and other indoor uses offers the greatest opportunities for water conservation and does not reduce the amount of water available to downstream water users, as use for outdoor irrigation can,”

More like this
Science
5.5.2022 11:00 AM
Webb Telescope alignment and more: Understand the world through 7 images
By Robin Bea
Mind and Body
5.10.2022 10:31 AM
Studies linking nature to better mental health focus on wealthy nations — here's why that's a huge problem
By Nick Keppler
Science
5.5.2022 9:14 PM
Look: A vast reservoir of water has been hiding under Antarctic ice, researchers confirm
By Jennifer Walter
Related Tags
Share: