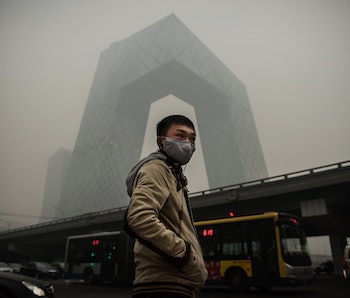 This Thursday marks the start of the International Conferences on Climate Change in Washington, D.C., hosted by the wildly conservative, deceptively bonhomie-named think tank Heartland Institute.

Far less scientific than its moniker suggests, the two-day conference is akin to a Coachella for climate change deniers, a place where they can all gather to have their views confirmed by people sitting at long tables in auditoriums. This year’s schedule is jam-packed with pseudoscience; the speaker list boasts the likes of Myron Ebell, who will receive an award for “speaking truth to power.”

The conference features a series of increasingly nonsensical panels, like Panel 3B, titled “Fossil Fuels and World Peace.” There’s a connection implied. President Donald Trump, however, begs to differ.

But the panel that takes the cake for craziest is without a doubt Panel 4A, vaguely entitled “Human Health Effects”.

On first glance, that seems out of place. Why would climate change deniers be devoting time to discussing the health effects of climate change? After all, it doesn’t help their case that preventable air pollution kills 6.5 million people per year.

Allow Panel 4A’s synopsis to do the talking:

The dramatic increase in per-capita income caused by the use of fossil fuels enables societies to invest major improvements in human health. There is no reason to believe any science produced by the Environmental Protection Agency (EPA) claiming modern use of fossil fuels is causing more health crises than it prevents. EPA’s impossible goal of reaching zero risk to human health is politically driven and unscientific.

Oh. That clears things up: Panel 4A plans to argue that the increased wealth from fossil fuels results in more investment to health services, and, moreover, that moving away from their use would cause such economic damage that countries could presumably no longer afford to keep their citizens as healthy. And that’s forgetting the last line, which asserts that not wanting entire cities to be underwater is now a political goal.

Put another way, Panel 4A plans to claim that more than 6.5 million people — and that’s a low-end estimate — per year will die as a direct result of countries shifting away from fossil fuels.

People in Paris had to invent smog filtering scarves because they couldn’t breathe while they rode their bikes to work. Your childhood jingle “London Fog” was brought to you courtesy of a killer factory cloud. But sure, enlighten us about how solar energy will become the biggest killer the world. The easiest way to refute this argument would be to ask one of those 6.5 million people how they feel about this claim — but we can’t exactly speak to them, can we? Because they died. From pollution.

But let’s be fair. Maybe Panel 4A is on to something. President Trump’s budget does plan to slice a huge chunk out of the EPA and in doing so indicates renewed support for fossil fuels. That means we’ll have way more money to spend on healthcare, right?