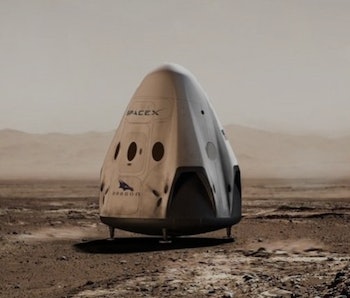 SpaceX’s trip to Mars is still years away, but the company doesn’t think that means it’s too early to look for a landing zone.

Jeff Foust at SpaceNews recently reported on a symposium in Texas where Paul Wooster, a systems engineer on the company’s Dragon spacecraft explained how Elon Musk’s private spaceflight company is looking for a place to park a spaceship. Wooster said his team is working with scientists from NASA’s Jet Propulsion Laboratory and other parties are currently pouring over high-resolution images of the red planet, looking for good places to park a spaceship.

In particular, the company wants to land in a spot that has plenty of ice on the surface, Wooster said during a presentation at a symposium in the Woodlands, Texas, on Saturday. While the group is considering several locations, they favor ones that are close to the planet’s equator, where more sunlight will make gathering solar power easier. Unfortunately, “it’s probably hard to find that along with ice,” said Wooster. The solution, it seems, is picking a spot at the most 40 degrees of latitude or so from Mars’s equator, where it will be cold enough for large ice deposits but still sunny enough for power.

The next problem is geography. Wooster said the team’s study found four spots in Mars’s northern hemisphere that looked great in medium resolution from the CTX Mars Reconnaissance Orbiter, but turned out to be too rough when viewed in high definition by the University of Arizona’s HiRISE imaging experiment.

“The team at JPL has been finding that, while the areas look very flat and smooth at CTX resolution, with HiRISE images, they’re quite rocky,” Wooster said. “That’s been unfortunate in terms of the opportunities for those sites.”

Eventually, the team found a sweet spot: an area on Arcadia Planitia, a smooth lava plain in the planet’s northern hemisphere that could be perfect for landing SpaceX’s Red Dragon spacecraft.

“What they’ve found is basically few or no rocks, and a polygonal terrain that they think is pretty similar to what was seen at Phoenix,” Wooster said. NASA’s Phoenix spacecraft landed near Mars’s north pole in 2008, and is probably the best precedent for the type of landing the Dragon would be attempting. (Curiosity and other Martian landings have touched down closer to the equator or in other hemispheres.)

But Wooster said that ultimately, he doesn’t want Dragon to be limited to one landing zone.

“We’re quite open to making use of this platform to take various payloads to other locations as well,” he said. “We’re really looking to turn this into a steady cadence, where we’re sending Dragons to Mars on basically every opportunity.”

SpaceX initially planned to launch a non-crewed Dragon spacecraft to Mars in 2018, but has since pushed its plans for a Mars-shot to 2020, putting it on a similar timeline to the European Space Agency’s ExoMars mission and NASA’s Mars 2020 program. It’s going to be quite the party in 2020.

More like this
Science
Dec. 5, 2022
Artemis I is on its way home from the Moon — after flying just 80 miles over the lunar surface
By Doris Elín Urrutia
Science
Dec. 3, 2022
Artemis I vs. Artemis II: How the NASA program will build off the successes of the first mission
By Doris Elín Urrutia
Science
November 23, 2022
NASA Perseverance rover's Mars landing site may have been too harsh for ancient life
By Kiona Smith
Related Tags
Share: