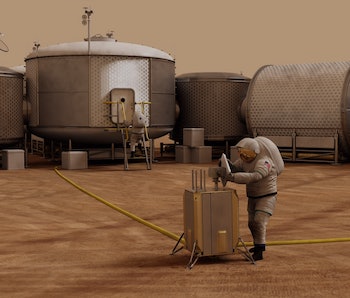 The billions of dollar and years of planning being invested into a crewed mission to Mars will be all for naught if the landing spot turns out to be a total bust. Where a rover (or even future astronauts) touchdown depends a lot on their proposed mission. Here’s how NASA is selecting the perfect landing spot for its next Mars 2020 rover.

There’s only one shot at landing, so it’s critical to get it right. The crash of the ExoMars Schiaparelli lander is clear evidence for how a single problem can lead to explosive failure. But landings go beyond strictly getting the technology right, the planning teams need to make sure they have selected the best site for each mission.

“You can’t say, ‘here are ten different sites, let’s go to them, said Michael Meyer, the lead scientist for NASA’s Mars Exploration Program, in a news release. “Each mission — it’s one shot. You definitely want to pick the right one.”

During the annual American Geophysical Union (AGU) meeting (which is typically held in San Francisco), Meyer discussed how NASA selects Martian landing sites. He said that community is key when narrowing down selection sites. Beginning with the Spirit and Opportunity missions, NASA started to hold landing site selection workshops. In these periodic meetings, the agency would discuss and narrow down potential landing sites through input from the greater scientific community. Currently, NASA is holding landing site workshops for Mars 2020 — and future human missions.

Meyer explained to the AGU audience that they’ve already held two workshops for the upcoming Mars 2020 mission, and have narrowed down the number of potential landing sites from 54 to just eight. A third workshop scheduled for February 8-10 in Monrovia, California, will cut that list down even further. Each of the eight sites will be studied in greater detail thanks to the network of robotic space probes currently orbiting the red planet.

Meyer was accompanied by Bethany Ehlmann — a NASA scientist who has worked on the Curiosity mission, and will be working on Mars 2020 — and Alex Longo, a high school student who has submitted suggestions for human and robotic landing sites.

The trio explained that in order to select the best landing site, the team starts by focusing on the mission objectives and what areas might support that kind of science. For Mars 2020, the rover will be searching for signs of life, so a site that has evidence of water — possibly an ancient shoreline — nearby are prime targets.

One unique aspect of the upcoming mission, is its ability to cache samples that will be collected by later missions. This could allow for more interesting possibilities. Perhaps there could be a landing site that scientists want to study but the 2020 rover isn’t really equipped to science it properly, no worries, it can just take a sample and drive on to another site.

Two hundred people attended the last Mars 2020 landing site workshop. The collaboration raised new questions as the list of potential landings sites whittled away. “It was a sincere scientific discussion about what we know about Mars, about what we think we know but have to admit that we really don’t know, or things we have misconceptions about,” Meyer said during the briefing.

Since each site offers so many possibilities, the process can actually get tougher as the number of potential landing sites dwindles. And Mars is always full of surprises, that promise unexpected challenges and learning opportunities. “You feel like you know the place already, and then when you get there, it’s different,” explained Meyer. “It’s always a great surprise.”