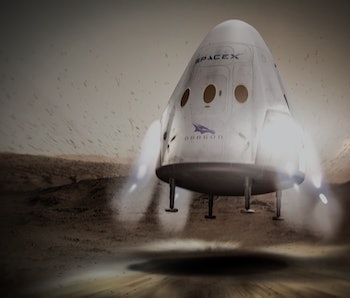 SpaceX’s first mission to Mars is slated for a 2018 launch window, but it turns out NASA it won’t be getting any of its scientific instruments onboard and shipped to the Red Planet as it once hoped.

At the annual fall meeting of the American Geophysical Union on Tuesday, Jim Green, the head of NASA’s Planetary Science Division, told attendees the agency was holding off sending a payload related to future and ongoing research investigations of Mars until SpaceX could prove it could pull off a soft landing on Mars.

If you’re not already caught up, SpaceX is planning to send one of its uncrewed Dragon vehicles to Mars in 2018 and land it on the surface as part of the first step in its plan to facilitate a future colonization of the planet by humans. This Red Dragon mission is getting a ton of logistical support and consultation from NASA, which is as eager as everyone else to this mission go smoothly.

The tradeoff for that support meant SpaceX was going to make NASA privy to its launch, entry, and descent data, as well allocate some space for NASA-led research equipment.

However, considering SpaceX’s track history in trying new things (SpaceX didn’t successfully land its Falcon 9 booster after a launch into space until its third attempt), NASA is probably wise to wait until the company can prove it can land something on Mars without an explosive finale before loading the spacecraft up with millions of dollars with of instruments.

SpaceX is planning to launch Red Dragon missions at nearly every open launch window (roughly every two years), so chances are pretty good if the first one goes well, NASA will be the first to sign up to rent out some cargo space so it can study Mars more in depth. The agency may also be relying more heavily on SpaceX if President-elect Donald Trump does end up nixing some of the agency’s future plans, so expect to see a lot of eyes keenly anticipating 2018.