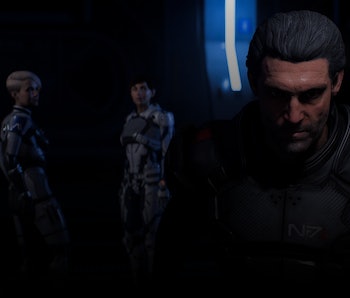 Well-respected for their work on titles like Star Wars: Knights of the Old Republic, Dragon Age: Inquisition, and the popular science fiction trilogy Mass Effect, the team over at BioWare have been hard at work over the past five years developing the next entry in the epic space saga which steps away from the exploits of Commander Shepard. Set to release next week on the Xbox One, PlayStation 4, and PC, Mass Effect: Andromeda is a third-person action role-playing experience like its predecessors with a few new approaches to exploring the wonders of space. This time around you’ll be playing as Scott or Sara Ryder, a relatively inexperienced Recon Specialist serving as part of the Andromeda Initiative’s Pathfinder team. You are the tip of the spear; whose job is to find a habitable planet for the thousands of human colonists aboard the ark ships following a 600-year journey from the Milky Way Galaxy to the unexplored Andromeda Galaxy.

While it’s true that Mass Effect: Andromeda shares a few game mechanics and contains many elements you’ll probably remember from the original trilogy, BioWare has completely reworked many core aspects of the experience like combat and exploration this time around. Here are a few things you should know before diving into the Andromeda Galaxy on launch day.

Andromeda is Part of the Mass Effect Universe

Despite taking place roughly 600 years following the events of Mass Effect 2 in a completely different galaxy, Mass Effect: Andromeda isn’t disconnected from the rest of the Mass Effect universe you know and love. During your time playing as either of the Ryder twins, you’ll find plenty of references to the original trilogy within the character dialogue, equipment descriptions, and available datapads scattered about the environments you’ll visit. While many of these references will only be familiar to players who worked through the original trilogy, they still add valuable and interesting information to newcomers who are looking to get a bit of insight into entire Mass Effect universe for the first time. Always keep your eyes peeled for new lore hidden around you while playing.

Combat Has Been Redesigned

Instead of sticking with the tried-and-true combat formula present in the original trilogy, BioWare opted to develop a new set of combat mechanics which would better fit the open exploration of planets and environments core to Mass Effect: Andromeda’s gameplay. Now, you’ll be able to automatically enter cover by approaching it with your weapon drawn in combat and navigate the battlefield using a jet pack, introducing the element of vertical movement to the Mass Effect’s level design without using the ladders present throughout Mass Effect 3. In Mass Effect: Andromeda, combat is extremely fast compared to the original trilogy, encouraging you to flank around enemies and use higher ground to get the drop on your opponents while fighting. Don’t forget to move around in Andromeda, or you’ll quickly be met with a prompt to reload your last save.

If you weren’t a fan of the traditional class system present in the original Mass Effect trilogy, you’ll be happy to hear that Mass Effect: Andromeda features a new profile system which allows you to freely customize your character using every single ability in the game. This time around you’ll be able to pick abilities from a combat, tech, and biotic skill tree, combining whichever abilities best suit your personal playstyle when it comes to fighting off your enemies. By spending a set number of skill points in a specific skill tree, you’ll unlock a profile which offers a set of passive bonuses which boost your capabilities with those skills. These share the same names as the character classes in the original trilogy, but can be swapped between throughout Mass Effect: Andromeda at will. Essentially, the new profile system provides an unrivaled level of depth and accessibility when compared the original trilogy while keeping the same satisfying combat intact.

Weapons Have Been Overhauled

In Mass Effect: Andromeda, the same weight system from Mass Effect 3 remains in play, allowing you to equip however many weapons you want regardless of your class at the expense of losing power cooldown speed. The more weapons you equip, the slower your powers will recharge, but this time around, you’ll be able to equip whichever guns you’d like no matter their classification. This means you can roll around with two different assault rifles and a submachine gun, or even a loadout compromised entirely of sniper rifles if you so desire. Modding weapons has carried over into Andromeda as well, giving you the ability to add additional damage or other effects to your weaponry using a loadout table within the world.

The most important addition within Mass Effect: Andromeda, however, is the introduction of weapon categories, which are determined by the origin of the weapon. You’ll have access to Milky Way weaponry (which use ammunition and are weak against shields), Heleus weaponry (which require a charge but pack a massive punch), and Remnant weaponry (which use beams and must recharge if overheated). Like profiles, weapons this time around are much more versatile, so be sure to experiment with what works best for your when you boot up Andromeda for the first time.

More like this
Entertainment
8.7.2022 1:00 PM
ILM legends reveal the sci-fi movie that changed everything wasn't Star Wars
By Ryan Britt
Entertainment
10 hours ago
Has your favorite HBO Max show been canceled? The fate of 9 sci-fi series revealed
By Robin Bea
Entertainment
8.3.2022 4:17 PM
Prey is an old school throwback that brings new life to the Predator series
By Eric Francisco
Related Tags
Share: