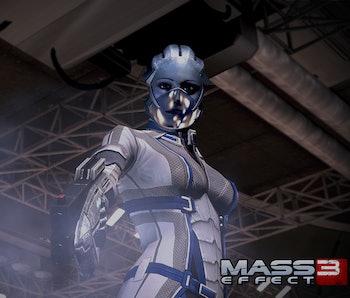 It’s been five years since BioWare’s Mass Effect trilogy came to a close. While the controversial ending of Mass Effect 3 is still a contentious point among the fandom, the negativity surrounding it didn’t scrub the goodwill it earned from three unforgettable games.

The next era of BioWare’s sci-fi series is fast approaching with Mass Effect: Andromeda, set to drop on consoles and PC on March 21. Before players become Pathfinders and forge a new path in an unexplored galaxy, here are 18 unforgettable missions from across all three games. These aren’t exactly the most well-designed or well-plotted missions, nor are they even the most challenging, but these missions are, undeniably, Mass Effect.

The recruitment mission for Dr. Mordin Solus is among the first Shepard can take in Omega, a crime-ridden station that feels (and probably smells) like ‘70s New York. This is where Mass Effect does its best to evoke Blade Runner, and it’s very potent as Shepard explores Omega’s slums trying to reach Mordin’s clinic in one piece. As the weak and sick lay dying while you shoot criminal mercenaries, it’s hard not to shake off that existential dread: Even if mankind can get to space, will things even change?

As for Mordin, well, while his recruitment mission is eh, it’s the eccentric Dr. Solus himself who quickly leaves an impression, which culminates in the next game …

After learning about the Genophage in Mass Effect, Shepard is given the chance to cure the Krogan of the infertility plague in Mass Effect 3. This is where the branching storyline culminates, with multiple options stemming from decisions made by players a whole five years prior. Besides being appropriately huge, “Priority: Tuchanka” is unforgettable for how players decide the fate of Dr. Solus. Be honest: Most of you cried.

“Would’ve have liked to run tests on those seashells.” Us too, doctor.

After fighting the Collectors for some time in Mass Effect 2, players get inside a derelict Collector Ship in a major mission halfway through the game. The ship is purposefully bleak and lifeless — as husk-like as the Collectors themselves — and is one of the most unnerving missions in all three games, complete with bombastic shootouts. While there are much creepier and scarier missions elsewhere — like “Project Overlord” and “Leviathan” — the Collector Ship is terrifying because it’s born from natural tension, making it far more dreadful.

Though it was a bit on-the-nose that a snow planet would be where shadowy corporations do their dirty work, it Noveria was a great setting for the missions at Binary Helix where Shepard went head to head with Matriarch Benezia and the Rachni. In deciding what to do with the misunderstood, roach-like alien species, Mass Effect created a huge talking point that measured moral compasses. It’s impossible to gauge how many conversations with fans almost always started with: “What did you do with the Rachni?”

Shepard first met Garrus Vakarian when he was a renegade cop straight out of Lethal Weapon in the first Mass Effect. Though a quiet stranger at first, he later revealed himself to be a well-rounded marksman with hilarious quips befitting his Han Solo swagger. So, imagine the shock and awe players had when, in Mass Effect 2, the badass vigilante of Omega is none other than Garrus.

Garrus unmasking as the feared “Archangel” superhero is an immortal moment for the series. Besides the fact that it’s a natural progression for a character like Garrus, it showed players how much this sci-fi universe could feel alive and that the story continues even after the game turns off.

While these two missions are completely different and achieve different goals, both share a common thread: Legion, the rogue Geth soldier and secret Shepard fanboy. A fan favorite character in the mythos, his loyalty mission in Mass Effect 2 takes place on the appropriately-named Heretic Station and is one of the creepiest settings of all three games. It’s a ship populated by millions, with each of them being a deadly A.I. that wants to kill you.

Meanwhile, “Rannoch: Geth Fighter Squadrons” is another Legion mission that takes place in virtual reality. Once again, Mass Effect goes heavy into its sci-fi influences, homaging Tron in a revealing low-stakes side-mission that stays with you long after the game is over.

Mass Effect 2 came loaded with amazing DLC (just wait for the ultimate one later in this list) but one of the most memorable was Kasumi Goto’s loyalty mission in which you infiltrate a swanky party and schmooze with the galaxy’s most elite criminals. Evoking classic spy movies, talking to lame one-percenters is its own fun until the shooting begins, and it’s all to retrieve an important file with extreme sentimental value for the seemingly cold Kasumi.

A standout character that players recruit in Mass Effect 2, the dying assassin Thane has only one ask of you: to help him help his troubled son. Seeing a killer like Thane be helpless to set his son on the straight and narrow is deeply emotional and makes you question what justice really means.

You might be noticing a pattern, but the Squad Loyalty missions in Mass Effect 2 were legitimately some of the best the franchise offered. In Mass Effect 2, Tali stands trial on her homeworld, and Shepard gets to fight on her behalf. It’s more engaging than a TV law drama and invariably leads to shooting on a spaceship. But fighting for Tali’s honor with nothing but the game’s dialogue options is its own reward and an unforgettable part of the series.

This one was inevitable, but fighting against hordes of aliens in a devastated London was what Mass Effect had been building up to, and aside from the ending, it absolutely delivers on the experience.

One of the last major story missions before the first game drew to an epic conclusion, “Virmire” is remembered for so many things that it’s hard to choose just one: the unavoidable loss of a squadmate, confronting Sovereign, and even an inspirational “Hold the line!” speech make “Virmire” amazing. But the possible death of Wrex by your own hands is, like the Rachni, another decision that drastically influences the series through to the end of the third game.

The first Mass Effect game’s climax on the Citadel was epic but also expected, given the plot’s progression. The Cerberus coup in Mass Effect 3 feels almost out of nowhere if it weren’t for Shepard pissing off the Illusive Man since the second game. With more blockbuster set pieces than the first Citadel invasion, the Cerberus coup is just a really strong mission — with the sad passing of Thane — that’s too much fun to play.

Another trip down dark, derelict hallways, the lead-up to the reveal of Legion, a goddamn Geth helping Shepard out, is itself an iconic moment of the franchise.

In Mass Effect 2, Shepard snuck into Omega’s mercenary ranks attempting to apprehend Archangel. But in the DLC for Mass Effect 3, a minor side quest — recruit Omega mercenary gangs to fight the Reapers — becomes a full-fledged fight for Omega itself. Omega is a shitty station, but in “Take Back Omega” (as it’s unofficially termed) Shepard gets to absolutely wreck shit in incredible firefights that help a ruthless Aria T’Loak resume control of her criminal underworld throne. Another bombastic mission with a cause so morally grey that it’s practically smoking.

Imagine stepping on an ancient planet where no one has walked in millennia. This is where Mass Effect became truly deserving of the word “epic.” As Shepard uncovers the truth about the Protheans through Virgil — with that amazing soundtrack piece from Jack Wall — players are awash with awe as they bear witness to science fiction at its finest. The race to the relay at the end cements “Ilos” as the reason why so many people love these games.

Though not nearly as terrifying as it could be, seeing the lengths a self-serving Cerberus scientist goes to in the name of Cerberus’s absolutely racist cause is one of the darkest depths the series ever plunges. The image of the autistic David, hoisted up like a Geiger-esque Christ figure, continues to haunt fans for years.

Mass Effect solidified the series’ signature “branching storytelling,” but the “Suicide Mission” in Mass Effect 2 cranked it up to 11. Ensuring the survival of nearly a dozen of your most loyal companions can be an exhausting experience, but it isn’t impossible. Did you leave anyone behind?

The DLC could have been a non-interactive movie and it would have still kicked ass, yet “Lair of the Shadow Broker,” with its Hollywood-esque spy movie intrigue and intelligent level design, is one of the rare DLCs that not only makes the rest of the packaged game feel complete but remains worthy of a premium price tag.