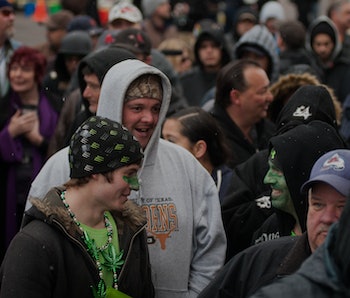 With an increasing number of states opting to legalize marijuana, it would make sense if weed became the party substance of choice on St. Patrick’s Day. It is green, after all.

And there is a little bit of momentum to that effect. Some St. Paddy’s events around the country are going to sell weed as well as booze, and some people have even termed the holiday “St. Fatty’s Day” in homage to fat blunts.

But the holiday doesn’t promise to be as much of a weed celebration as one might assume. Via an informal inspection of public social media, those who are opting to smoke pot instead of drink — and are scoffing at everyone else about hangovers — seem to be those who smoke a lot anyway. This won’t be any 4/20, a day when those who are unfamiliar with weed try it out. No, 4/20 remains the St. Paddy’s Day of weed, and St. Paddy’s Day remains, among other things, a drunken shit show.

Actually, though, if pot were to be embraced as part of St. Patrick’s Day celebrations, the Irish would probably be very much on board. The ugly stereotype of the drunken Irishman is probably what’s led to alcohol entrenching itself in St. Paddy’s Day culture, but weed is extremely popular in Ireland. Medical marijuana was recently legalized in the country, and about half of Irish citizens are down to make it legal for recreational purposes, too.

If you steer clear of weed but opt for beer on Friday, be sure to dye it green.