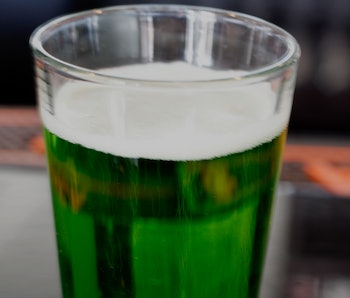 Here’s the best way to dye your beer (or even scotch, if you’re really feeling adventurous) green:

You’ll need a beer that’s light in color (meaning it has a low SRM, for you brew nerds out there).

Or if you want to drink something Irish, try Harp, a pale lager. Fitting as it may seem, don’t use Guinness. That stuff is dark. You’ll barely be able to see the green and it will probably dye your teeth. Unless that’s your style, in which case, props to you for fully committing to the holiday.

Buy green coloring, not blue and yellow—combining those won’t work as well. One small .25oz bottle will get you through about six 6-packs.

Artificial food coloring isn’t fantastic for your health, but you should be fine if you don’t consume it regularly. Using artificial dye won’t affect the taste, unlike wheat grass or other natural options, but you can certainly go with the latter if you prefer.

Choose a glass over keeping it in the bottle—you’ll want to put in the dye first and then pour the beer on top; otherwise you’d need to stir the mixture and the beer would go a bit flat.

But if you’re performing this experiment on the road, using the bottle will work fine. Try a bottle with clear glass so you can really see the green (a Corona Extra, for example).

Use about three to five drops for every 12 ounces (the amount in a typical bottle of beer).

The dye is made of densely packed molecules. As they disperse within the drink, they alter the beer’s molecules to stop reflecting a light brown color when they meet photons (light particles) and instead reflect green. It’s actually pretty interesting science, but maybe don’t try explaining it to people after they’ve knocked back several Veridian brews.

Bonus: This Rocks. Would Using Scotch Go Too Far?

You might be judged, but you should go for it. It’s totally possible to make green scotch. Try just a couple of drops of dye, same as with beer.

There you have it! Enjoy your peculiar drinks this Friday. Although, maybe don’t have too much — a lot of green stuff can lead to a blackout.