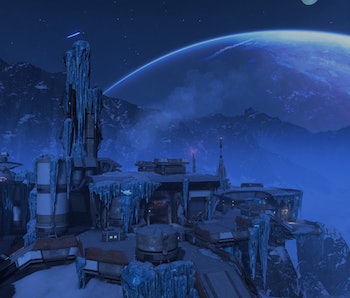 The next installment in the Mass Effect series is right around the corner, releasing this week to players across the world on Xbox One, PlayStation 4, and PC. But if you’re a subscriber to EA Access on Xbox One or Origin Access on PC, you can jump into a limited portion of the campaign or the full multiplayer experience as part of Electronic Arts Play First Trial program. Available now on both platforms, the trial gives you access to ten hours of Mass Effect: Andromeda and allows your progress to carry over into the full version of the game.

If you have played Mass Effect 3’s cooperative multiplayer before, Mass Effect: Andromeda’s multiplayer component is going to feel relatively familiar. Once again, it’s a co-operative wave-based mode where you’ll be fighting with three team members against waves of enemies while completing random objectives that pop up every few waves. Instead of ten waves like in Mass Effect 3, Mass Effect: Andromeda’s matches only last seven, although things get more intense much quicker this time around.

If you’re diving into Andromeda’s multiplayer for the first time, here are a few things you should know:

Right when you boot into Mass Effect: Andromeda’s multiplayer, you’ll be prompted to complete a brief tutorial mission before heading into co-operative matches with a group of friends or random players via matchmaking. Even though it’s quite tempting to skip over the mission entirely or return to it once you’ve played through a few waves, you should take a few minutes to knock it out beforehand and earn a free reward pack. Inside the pack, you’ll find a few weapons, consumables, and power-ups you can use to get off your feet for free, so don’t miss them for the sake of saving yourself five minutes of playtime. It’s also worth noting that Andromeda’s multiplayer also presents you with a tutorial challenge that will reward you with a free advanced pack, provided you complete everything on the list. Try to knock this one out while playing for some extra rewards.

Like most games from Electronic Arts developed by BioWare, Mass Effect: Andromeda offers a few free rewards for players who have purchased or played the company’s other games like Dragon Age: Inquisition or Mass Effect 3. When you have a minute, head over to the multiplayer store and tab over to the rewards tab on the far right, where you’ll find a basic pack, starter park, and tutorial pack (if you completed the tutorial mission mentioned). You’ll also see a few loyalty packs available if you have other BioWare games linked to your EA account too which should net you a decent set of equipment and characters to begin multiplayer with from the start.

Stick With a Single Character

Just like the characters in Mass Effect 3’s multiplayer, Mass Effect: Andromeda’s available multiplayer characters each have a set of three active abilities and two passive abilities which help determine their role on the battlefield. You’ll be able to choose from a set of human characters, but regardless of which one you end up going with be sure to stick with them for a dozen matches swapping out. With each successful match, your character will gain additional experience and skill points which you can spend in their ability tree to make them more formidable on the battlefield. This includes boosting the damage of their active abilities, unlocking new secondary ability traits, and improving their passive traits like shields and health so they can sustain more damage. If you opt to skip around, no character you try will feel inherently powerful, and you’ll have a tough time against some of the game’s harder difficulties that net better rewards.

Don’t Forget to Move Around

The addition of a jet pack in Mass Effect: Andromeda is easily the biggest change in both multiplayer and single-player, adding an entire level of vertical movement which previously didn’t exist in the series. Every single character available in multiplayer can now use a jet pack to quickly dodge incoming enemy attacks, jump long distances to escape hostile threats, and hover in mid-air for a brief amount of time to prepare a perfect heavy-melee takedown. No matter how you feel about the use of a jet pack in Andromeda, know that your enemies are going to use it against you. You’ll want to start practicing your jet pack capabilities if you want to survive against the worst multiplayer has to throw at you. Always — and I mean always — be on the move in multiplayer, regardless of how comfortable you feel engaging your enemies. Otherwise, you’ll find yourself surrounded and outgunned in a matter of seconds more often than once.

More like this
Gaming
6.23.2022 4:00 PM
You need to play the best cyberpunk RPG trilogy on Xbox Game Pass ASAP
By Robin Bea
Gaming
6.22.2022 3:00 PM
TMNT: Shredder's Revenge is the retro beat ‘em up of your dreams
By Robin Bea
Entertainment
21 hours ago
25 years ago, Nic Cage made his most explosive sci-fi movie ever — it was almost even better
By Jake Kleinman
Related Tags
Share: