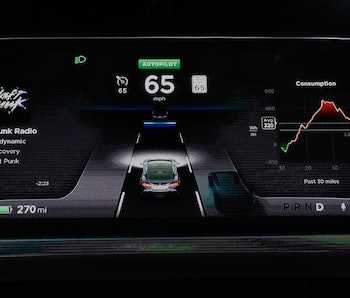 In the next 10 days or so, Elon Musk says Tesla will finally have all of its cars on the same level. The Tesla CEO said a new software update is likely to go out to all cars equipped with Tesla’s second-generation hardware, which could finally bring the newer cars to full parity with Tesla’s first generation.

Tesla’s software development efforts are currently focused on bringing Hardware 2-powered cars up to the same standard as its older Mobileye-powered vehicles. Although Tesla wanted to use both systems side-by-side for an interim period, Mobileye refused, forcing Tesla to “cross the Rubicon.” Recent Tesla updates have focused on bringing the same semi-autonomous Autopilot features found on older hardware cars onto the company’s own platform, but the new update, 8.1, will benefit drivers of both generations of vehicles.

Update 8.1 is expected to bring improvements to the company’s car computer systems, upgrading the system’s Linux underpinnings and improving the built-in web browser, and Musk hinted that the pesky full-speed Autosteer function might make it in there too.

Unfortunately, older car owners tired of never seeing any improvements may have to wait a bit longer. Musk told a fan that the update could get delayed, depending on how testing goes for missing Autopilot features:

In Hardware 2 vehicles, Tesla has been gradually increasing the maximum speed limit allowed during the autonomous steering mode. Last week, Autopilot version 17.9.3 raised the limit for semi-autonomous driving along undivided roads from 50 mph to 55 mph. The update followed version 17.7.2 the previous month that brought over autonomous parallel parking.

Once the two systems reach parity, Hardware 2 cars are expected to pull forward with greater autonomy. The end goal is to use the newer systems to reach full autonomy by the end of the year, an ambitious target.

The 8.1 update shows that Tesla is still committed to making improvements beyond the gradual push towards autonomy. The 17-inch touchscreen found in the central console of Model S and Model X vehicles acts as a key hub for in-car controls, providing easy-to-access entertainment and information. But the advanced system means Tesla needs to stay on top of updates to ensure the screen remains useful to consumers. After all, a web browser that can’t easily access modern websites is a bit useless.

But while some may welcome improvements to the web browser in the interim, chances are a lot of people won’t care. A recent survey showed that only around four percent of Tesla owners use the browser every week. Perhaps autonomy is a more interesting goal after all.