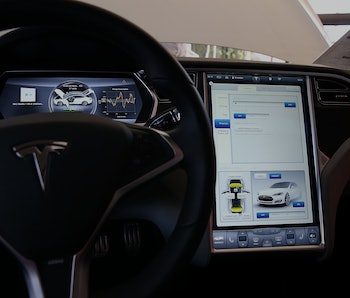 One of the most striking aspects of Tesla’s Model S and Model X is the giant tablet in the center of the dashboard, a 17-inch touchscreen that feels like something out of the future, complete with a bundled web browser and full internet access. The problem is, most Tesla drivers don’t really care — according to new research, only a fraction of Model S or X owners use the tablet’s browser.

Advertising network Drawbridge, which observes 3.3 billion devices globally, looked at ad viewing data over a 30-day period at the end of 2016. In that time, it saw only 38,932 use the in-car browser, around 25 percent of the over 150,000 Teslas currently on the road.

And that’s over a 30-day period. Over a seven-day period, the firm observed just 5,747 browsers in use, meaning maybe 25 percent of owners use the terminal’s internet once a month, but only four percent used them every week.

This doesn’t mean the tablet is useless, though. Acting as the main control center, the tablet provides easy access to features like air conditioning, music selection, and GPS.

Those that do use the browser, however, use it quite a lot, and end up making around 36 ad requests per day. Users mostly accessed the browser to look at news, representing about 55.46 percent of ad requests, while 22.88 percent of requests were for sports. Interestingly enough, food and drink made up just 17.4 percent of requests, while shopping made up 16.4 percent. Although these two categories make more sense in-car when it comes to navigation, they represented a smaller fraction than news.

Although users don’t seem to care about one of its major features, Tesla seems interested in taking the tablet to the next level. Prototype versions of the Model 3 place the tablet in the center of the console, supported by an arm, resulting in a decidedly cooler-looking device. Perhaps when the $35,000 electric car launches, people will hopefully care more about the tablet.