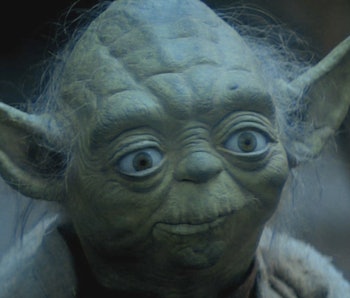 Speaking to Variety, famous Yoda actor Frank Oz neither confirmed nor denied his involvement with future Star Wars projects. On Sunday, he said, “To be true to the people who asked me, and they are kind of my family, I have to say I’ve been asked not to talk about it.” Obviously, this could simply be read as a straightforward denial that Oz is returning to voice Yoda, but the wording is interesting. “I love Yoda. I would be happy to talk to you about it at the time they let me,” he said. If Oz was simply not involved at all, it follows he would have just said so. At the very least, his comments confirm that he has in fact been in contact with Lucasfilm about the possibility.

Famous for his collaborations with Muppets creator Jim Henson, Frank Oz was the puppeteer and voice of Yoda in The Empire Strikes Back in 1980. Oz voiced Yoda subsequent in Return of the Jedi, and all three Star Wars prequels. And while Tom Kane voiced Yoda in the majority of The Clone Wars, Oz returned the role on Star Wars Rebels as recently as 2016. This recent involvement with Star Wars canon combined with Oz’s new comments could suggest a cinematic Yoda comeback.

Outside of Rey’s vision in The Force Awakens, new Force ghosts haven’t been seen in Star Wars since the original trilogy. The final season of The Clone Wars established that after a hot tip from Qui-Gon, it was Yoda who pioneered the technique of preserving his essence beyond death. In Revenge of the Sith, Yoda tells young Obi-Wan he’ll show him how to become a ghost, if necessary.

So, if Yoda returns as a ghost in The Last Jedi, it stands to reason his buddy Obi-Wan isn’t far behind.