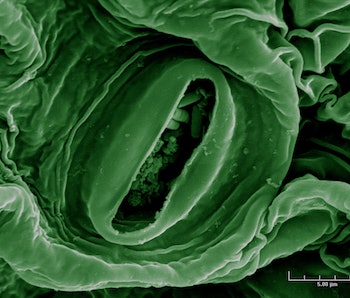 A few times a year, we hear about new outbreaks of food poisoning. Nearly half of the time, scientists trace them back to vegetables that were contaminated by water that contained human or animal feces. The underlying culprit is often Escherichia coli, a bacterium that lives in the intestines of warm-blooded animals. It thrives in the moist environments between the leaves of plants like spinach or cabbage, and among the tender sprouts of alfalfa or clover, among others. And while not all strains of E. coli will make you sick, the ones that will make you sick are nasty. They can cause severe diarrhea and urinary tract infections, often leading to hospital visits and in some cases death.

Because fecal contamination can cause such serious health problems, scientists have hoped to find quicker and cheaper ways to detect it in vegetable crops. In addition to E. coli, Enteroccocus faecalis, and Enterococcus faecium are tell-tale indicators of fecal contamination. But current lab techniques require costly, time-consuming procedures such as DNA amplification and immunoassays to detect their presence. These methods possess some advantages, including high sensitivity, but they are costly and prone to false positives. A team of scientists is hoping to change that with some new rapid detection technologies that farmers and regulators could employ cheaply.

In a study published Wednesday in the journal Analytical Chemistry, scientists from Colorado State University and the University of Wyoming reported that they’ve developed a way to quickly and reliably test vegetables and water for the three bacteria that indicate the presence of human and animal waste. Their technique involves a combination of electrochemical testing and colorimetric paper-based wells. In conjunction, these two methods reliably detected enzymes associated with E. coli and the Enteroccocus species in alfalfa sprouts and lagoon water that the scientists tested.

One thing that sets this method apart from existing tests is the cheap materials involved. By printing carbon electrodes onto transparency film and using paper test wells, the researchers were able to develop a set of materials that not only cost far less than existing methods, but also deliver results in a fraction of the time — 4-12 hours compared to the 48 hours required to culture bacteria in a lab.

The next step for these researchers is to develop a device that combines both of their detection techniques.

“The advantages of using both methods can overcome disadvantages associated with using an individual technique, making a combined approach more applicable to a wider range of sample types and applications,” they write in the study.

Abstract: The development of transparency-based electrochemical and paper-based colorimetric analytic detection platforms is presented as complementary methods for food and waterborne bacteria detection from a single assay. Escherichia coli and Enterococcus species, both indicators of fecal contamination, were detected using substrates specific to enzymes produced by each species. β-galactosidase (β-gal) and β-glucuronidase (β-glucur) are both produced by E. coli, while β-glucosidase (β-gluco) is produced by Enterococcus spp. Substrates used produced either p-nitrophenol (PNP), o-nitrophenol (ONP), or p-aminophenol (PAP) as products. Electrochemical detection using stencil-printed carbon electrodes (SPCEs) was found to provide optimal performance on inexpensive and disposable transparency film platforms. Using SPCEs, detection limits for electrochemically active substrates, PNP, ONP, and PAP were determined to be 1.1, 2.8, and 0.5 μM, respectively. A colorimetric paper-based well plate system was developed from a simple cardboard box and smart phone for the detection of PNP and ONP. Colorimetric detection limits were determined to be 81 μM and 119 μM for ONP and PNP respectively. While colorimetric detection methods gave higher detection limits than electrochemical detection, both methods provided similar times to positive bacteria detection. Low concentrations (10^1 CFU/mL) of pathogenic and nonpathogenic E. coli isolates and (10^0 CFU/mL) E. faecalis and E. faecium strains were detected within 4 and 8 h of pre-enrichment. Alfalfa sprout and lagoon water samples served as model food and water samples, and while water samples did not test positive, sprout samples did test positive within 4 h of pre-enrichment. Positive detection of inoculated (2.3 × 10^2 and 3.1 × 10^1 CFU/mL or g of E. coli and E. faecium, respectively) sprout and water samples tested positive within 4 and 12 h of pre-enrichment, respectively.

More like this
Mind and Body
17 hours ago
Why just one case of polio is cause for alarm — a virologist explains the dreaded disease
By Rosemary Rochford and The Conversation
Mind and Body
Sep. 22, 2022
A new study challenges a longstanding myth about Covid-19 and Vitamin D
By Miriam Fauzia
Mind and Body
Sep. 20, 2022
Do I need a polio booster?
By Katie MacBride
Related Tags
Share: