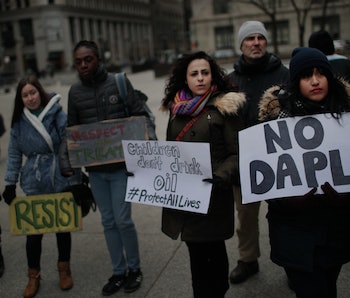 The ACLU on Wednesday filed a motion to dismiss a warrant issued in Washington state would allow the Whatcom County Sheriff’s Departmen to examine user data from the Bellingham NoDAPL Facebook group. The group acts as a local hub of information on protests against the Dakota Access Pipeline. The warrant was issued on February 16, five days after the protests on February 11 in which demonstrators blocked a highway for over an hour.

A press release from the ACLU of Washington explains that the warrant “seeks private, sensitive information about people’s political views and opinions, images of political actions, and personal information, including locations.” The organization challenges that it’s overbroad and non-specific.

The ACLU says that police are not only looking for information regarding those involved with the highway protest but “also data related to an unknown number of people who merely interacted with the group via Facebook at some point during the 12 days covered by the warrant.” The ACLU’s primary concern in filing the motion is the unconstitutional dampening effect this information gathering could have on individuals’ willingness to engage in future political speech.

Speaking to Inverse, ACLU of Washington Communications Director Doug Honig says that it’s hard to be sure if warrants like this have been issued in the past. “Many times these things come with a gag order,” he says, which makes it tough to say how much this is or isn’t being done around the country. Still, Honig reiterated the ACLU’s belief that the warrant does not stand on firm legal footing.

The ACLU also maintains that, beyond the blockage of highway traffic, the February 11 protests were peaceful and did not result in any arrests at the time, further calling into question the motivations behind the warrant.

“Government requests for information protected by the First Amendment must meet a high bar in order to ensure that political speech and advocacy are not chilled,” said Brett Kaufman, staff attorney for the New York ACLU Center for Democracy, in the press release. The ACLU contends that this warrant does not meet those standards.

Considering the substantial role that social media sites like Facebook have played in resisting DAPL and giving exposure to the issue, the ACLU’s worries are not unfounded.

Also concerning is any precedent that might stem from the issuance of this warrant. Because it seeks information on people who were, at most, only peripherally involved with the Facebook page, it could open the door for police to draw prosecutable connections from little more than internet browsing activity. It would be a useful, if harmful, strategy for anyone looking to isolate resistance groups and deter political actions. Meanwhile, a decision in favor of the ACLU could curb law enforcement from overreaching.

“If the warrant’s quashed, it will serve as a good precedent for law enforcement that they can’t engage in these kinds of phishing expeditions,” Honig says.

The February 16 warrant is merely the instance of alleged overreach by law enforcement in response to NoDAPL protests. A string of noteworthy incidents occurred toward the end of 2016 in Standing Rock, which at one point saw police using water cannons to spray protesters in freezing weather. Given that President Donald Trump has ordered the construction of the pipeline be resumed, there may well be more tensions to come.

A hearing on the motion is set for Tuesday, March 14 in Whatcom Superior Court.

More like this
Culture
Feb. 7, 2023
Lost Never Solved Its Weirdest Sci-Fi Mystery, But This Episode Came Close
By Jake Kleinman
Culture
Feb. 4, 2023
The End of the Cold War Could Have Killed James Bond. Instead, it Made Him Stronger.
By David Grossman
Culture
10 hours ago
How One Lost Episode Solidified Sawyer as TV’s Greatest Antihero
By Jake Kleinman
LEARN SOMETHING NEW EVERY DAY.
Share: