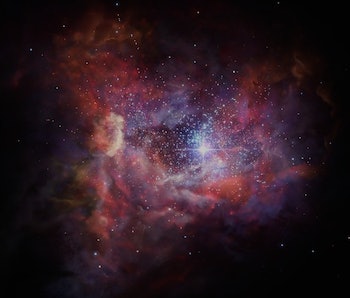 In the context of the universe, a couple thousand or million light-years of distance is just stone’s throw away. But it’s stranger still to think that when we peer off at objects this far away, we’re really looking back in time — seeing light that has spent millions of years traveling the distance to reach us. Astronomers have just made new observations of one of the most distant galaxies ever identified — providing a glimpse of the universe when it was just a wee infant.

The new data, acquired using the European Southern Observatory’s Atacama Large Millimeter/submillimeter Array (ALMA) telescope, sheds light on the dust patterns of galaxy A2744_YD4, which is around 13.2 billion years old — just 600 million years shy of the age of the universe itself.

So when we look at A2744_YD4, 13.2 billion years into the past, we know that by now, this galaxy probably looks quite different than how we are actually seeing it. ALMA detected A2744_YD4 at about 600 million years old, making it one of the “youngest” galaxies scientists have ever seen, even though it’s really one of the oldest.

The research group who made the observations were surprised by the enormous amount of dust in the object, which was rare in the young days of the universe. This indicates that there must have been an even earlier generation of stars that had exploded to create the dust.

Because a star can live anywhere from a few million to several billion years, this discovery may throw off the entire cosmic timeline. Using telescopes like ALMA and ESO’s Very Large Telescope (VLT), scientists are able to gaze deeper into the universe than they ever have before, so discoveries like these will unfold over the next few decades.

Dating the universe is the “holy grail” of modern astronomy. Studying the earliest moments in the universe’s conception gets us one step closer to the big bang, and ultimately to the birth of our own planet and humanity itself.