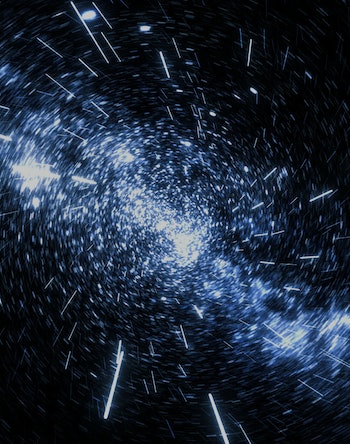 Dark energy comprises about 69 percent of the known universe and it’s the best explanation we have for why the universe is expanding. But as is the case with dark matter, we have yet to actually observe or measure dark energy directly. We instead rely on an indirect study of this mysterious property by tracking changes in the distance of galaxies far away from us.

In a record-breaking series of papers submitted this week to the Monthly Notices of the Royal Astronomical Society, an international team of hundreds of scientists working on the Sloan Digital Sky Survey III (SDSS-III) have published a new 3D map of 1.2 million distant galaxies in the universe — which helps provides the best demonstration yet of how dark energy has driven the expansion rate of the universe.

“We have spent a decade collecting measurements of 1.2 million galaxies over one quarter of the sky to map out the structure of the universe over a volume of 650 cubic billion light years,” says Jeremy Tinker, a New York University astronomer and one of the leaders of the research team involved. “This map has allowed us to make the best measurements yet of the effects of dark energy in the expansion of the universe. We are making our results and map available to the world.”

The new map was developed out of measurements taken by SDSS-III’s Baryon Oscillation Spectroscopic Survey (BOSS) program. The BOSS observes the size of baryon acoustic oscillations through pressure waves that traveled through the young universe (when it was at the wee age of 400,000 years old). These waves were frozen in the matter distribution of the universe at some point, resulting in galaxies spread out and separated by a peculiarly defined distance scientists call the acoustic scale.

The acoustic scale helps illustrate the extent that galaxies are far apart from one another — but that’s just part of the equation. To understand the expansion rate of the universe, we need to know the exact amount of dark matter and dark energy in the universe. The BOSS data helps provide an estimate of dark energy as extrapolated through the acoustic scale (via baryon acoustic oscillations).

The conclusion? “If dark energy has been driving the expansion of the universe over that time, our maps tell us that it is evolving very slowly, if at all: the change is at most 20 percent over the past seven billion years,” says Florian Beutler of the University of Portsmouth, who led two of the papers that were submitted this week.

It’s very likely that as more precise methods of measuring and mapping the universe are developed, we’re going to get a more refined view of the universe — and, hopefully, that includes a direct measurement of dark energy and dark matter. For now, this is an essential stepping stone toward the goal of knowing exactly how our universe is changing.