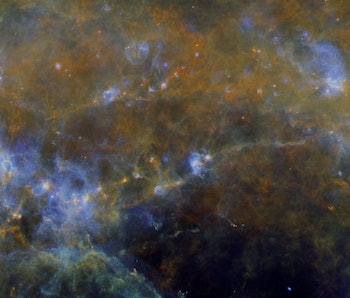 These swirling, bubbling galactic clouds are cooking up a cosmic breeding ground for young stars.

This composite image of the molecular cloud, RCW106, which is about 12,000 light years away, comes from the European Space Agency’s Herschel Space Observatory. In it, you’ll find all the ingredients you need to whip up newborn stars.

The smoky looking formations across the image are various gases — like hydrogen, carbon, and oxygen — which, are being combined with stellar dust most likely accumulated from ancient star explosions. The image was captured in infrared light, so the blue areas are actually the hottest regions of the cloud, while the reds and golds are the coolest.

The high gravitational energy it takes to fuse the dust and gas compounds into stars is producing all of that heat. You can see this process really unfolding in the lower left portion of the image, where there is a very dense star cluster of about a dozen newborn stars being formed and releasing so much heat that the clouds become a pale blue in the infrared view.

The pockets throughout the image were created by massive winds swirling through this formation, kind of like the spoon that is stirring the pot. It is along the edges of those pockets where most of the stars in the cloud form.

The chemical makeup of the winds, gases, dust, and heat are helping scientists understand what exactly it takes for these stellar nurseries to form and ultimately, how our universe came to be.