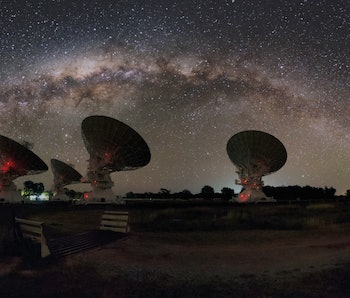 Astronomers in Australia have determined there are a few possible shapes that invisible “lumps” of gas found between stars in the Milky Way can take: noodles, lasagne sheets, or hazelnuts. And these new findings can help us understand the very early stages of star formation.

In a paper published today in Science, astronomer Keith Bannister and his colleagues at the Commonwealth Scientific and Industrial Research Organization CSIRO detail their observations of these dark “lumps.” The scientists employed a new technique using the the Compact Array telescope to make these new observations.

Despite what you might see in a lot of different sci-fi films and video games, the predominant form of matter flying around the universe isn’t solid rock — it’s gas. Sometimes that gas comes together as ultra-hot energy and forms a star. Sometimes, like in a nebula, it just floats out strangely like a drop of food coloring in a glass of water.

And then other times, it comes together in seemingly invisible structures shaped like noodles. Or large sheets of lasagne:

That interstellar gas is an important repository for collecting dispersed material from old, dead stars and allows it to be recycled into new stars and other celestial objects. If it’s not already clear why this is a big deal, I’ll lay it all out very clearly: New stars lead to new star systems, which lead to the formation of new planets, which can — if everything lines up well enough — lead to habitable worlds.

The CSIRO astronomers were most interested in taking a look at peculiar gaseous lumps which could help explain the behavior of this ultra-thin galactic gas, and how that might lead to star formation. Using the CSIRO Compact Array, Bannister and his colleagues took at look at quasar PKS 1939-315, located in the constellation Sagittarius, and started watching a so-called “lensing” event — where the gaseous lumps appear to alternate between strong and weak states over time.

But lensing events — which are about the size of Earth’s orbit around the sun and are thought to occur about 3,000 light years away — are rare. So when the astronomers finally found one, they kept their eyes on it for an entire year.

The work paid off. The team looks to have finally pinpointed the shape of these lensing events. They’re not solid lumps or oddly bent figures — they’re more like flat sheets, or hollow noodle-like cylinders, or even spherical shells similar to hazelnuts.

That’s a lot of strange geometry to work with.

In any case, it’s going to take a bit more work before scientists can pinpoint what precisely is causing these lensing events. One theory is that cold clouds of gas are pulling together through their own gravitational force — which would suggest those clouds are a pretty significant portion of the galactic gas floating around the Milky Way.

Not a bad theory. Still, I’m rooting for something that introduces another pasta element into the space research lexicon. The good writers of Inverse think fusilli, angel hair, conchigliette, egg noodle, or even bowtie could use some love.

More like this
Science
Jan. 22, 2023
You need to explore this amazing map of the Milky Way
By Kiona Smith
Science
Jan. 19, 2023
Our Solar System may be surrounded by a halo of 10 million interstellar objects
By Kiona Smith
Gaming
Jan. 25, 2023
"Mindboggling" Launcher layoffs prompt outcry and tributes to WaPo gaming vertical
By Jess Reyes
LEARN SOMETHING NEW EVERY DAY.
Related Tags
Share: