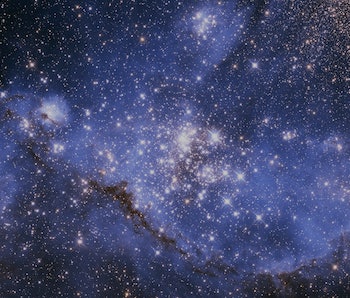 Ordinary matter — that is, everything that’s not dark matter or dark energy) — only makes up five percent of the universe, and us feeble humans have only accounted for half of that. The rest is missing. Or rather, was missing.

In their search for this “missing matter,” an international group of astronomers have hit on something of lucky break.

The team, publishing its latest findings in the journal Nature, managed to pinpoint the location of a strange “fast radio burst,” or FRB, in the far reaches of the universe, helping to affirm currently held theories about the distribution of matter in the universe and revealing exactly where we can find a bunch of the missing matter.

FRBs are basically radio signals that are thought to be emitted by the remnants of recent supernovas, the centers of galaxies, or star-forming nebulae. They’re very bright and intense, but they only last a few milliseconds — making them extremely hard to study. Yet they might be the key to understanding a lot of what we don’t know about space.

In the Nature paper, everything comes back to a particular FRB detected last April by the Parkes radio telescope in Australia. After narrowing the possible location of the signal using a radio interferometer, the team used the Subaru Telescope in Hawaii to determine that this FRB was coming from an elliptical galaxy six billion light-years away.

It’s the first time astronomers have identified the host galaxy of an FRB.

Knowing where an FRB originates from allows scientists to analyze and determine the density of the material between that point and Earth. “By also having a distance we can now measure how dense the material is between the point of origin and Earth, and compare that with the current model of the distribution of matter in the universe,” said Simon Johnson, an astronomer with CSIRO’s Astronomy and Space Science division, in a release.

Accounting for all of the universe’s missing matter could ultimately help astronomers figure out the cosmological origins of the universe after the Big Bang. Doing so, however — and there’s no way to overstate this — will be really difficult and will, at the very least, require astronomers to solve the mystery of what exactly produces FRBs. Still, knowing where they’re coming from is more than a decent start.

More like this
Science
21 hours ago
JWST will unlock the mysteries of these 7 peculiar exoplanets
By Jennifer Walter
Science
20 hours ago
Webb Telescope will take aim at one of Hubble's most iconic targets
By Georgina Torbet
Science
5 hours ago
These 5 objects could be Webb's full-color first images
By Kiona Smith
Related Tags
Share: