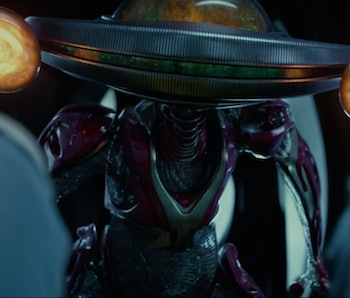 In the minute-long clip, the teens explore Zordon’s spaceship — which they’ll quickly learn is the Command Center — which is hidden underground. The brain of the team, Billy (RJ Cyler) speculates that the ship must have been there for millions of years based on the rock formations surrounding it. That’s when the Red Power Coin, possessed by Jason (Dacre Montgomery) begins to glow, reinforcing the original rule from the series that only those who own a Power Coin may enter the Command Center.

As the teens explore, that’s when Alpha 5 shows up, dragging Trini (Becky G) only for him to excitedly scream: “You’re real!” Seems Alpha doesn’t get out much!

This moment from the film, directed by Dean Israelite, is radically different from the first episode of the TV show when the teens were teleported by Alpha and Zordon to the Command Center when Rita Repulsa attacks for the first time.

See the clip from Lionsgate below.

And for comparison, here’s the same moment from the OG series. My, how things have changed.

Saban’s Power Rangers will be released on March 24.

More like this
Entertainment
6.15.2022 11:00 AM
15 years ago, Fox made the best Fantastic Four movie ever — it still stunk
By Jon O'Brien
Culture
6.20.2022 12:00 PM
25 years ago, the worst Batman movie ruined the franchise — and inspired a modern trend
By Dais Johnston
Entertainment
8 hours ago
Harley Quinn Season 3 could fix a major Batman controversy, trailer hints
By Eric Francisco
Related Tags
Share: