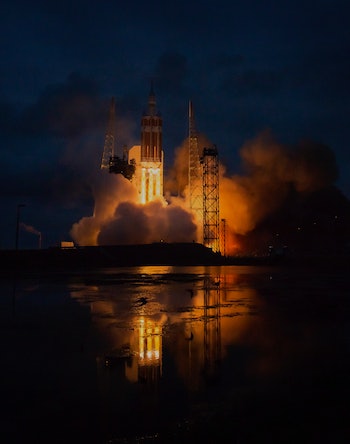 For more than 40 years, the world has eagerly awaited the day when humans would finally go back to the moon. SpaceX’s plans to send two people on a circumlunar trip into space in 2018 is the answer.

And it’s shocking to think NASA won’t be the ones spearheading this return to the moon.

For nearly 60 years, NASA has been the face of human space exploration. After America clinched the space race with the Apollo 11 moon landing in 1969, NASA became the undisputed face of space-faring adventures for the globe. It was NASA that built the iconic Space Shuttle — a vehicle that would ferry astronauts to and from orbit for almost three decades. Before the Challenger accident of 1986, NASA had never lost an astronaut during spaceflight. There would be no International Space Station without NASA’s heavy involvement. And now the world eagerly awaits NASA landing human boots on Mars sometime in the 2030s.

So what will SpaceX’s mission mean for NASA’s position in the world? If Elon Musk and his team manage to show the world NASA does not retain a monopoly over human exploration of other worlds, does that effectively turn into an old force on its way out? Does the student basically become the master, in the eyes of the public?

Not quite. Andrew Sloan, the founder of Cosma Schema, a branding firm which specializes in services for the space industry, thinks that SpaceX’s strategy is pretty shrewd, but will not necessarily be a major blow to NASA.

“This is classic SpaceX: announcing a seemingly impossible deadline to do a seemingly impossible task,” Sloan says. Although it’s new territory for SpaceX to pursue a mission to the moon, being this bold is an effective power move for smaller parties looking to make a splash in a bigger industry dominated by older powers.

“The moon historically has been NASA’s territory.” SpaceX stepping into that territory is a powerful gesture, he says.

“It’s also a move that raises a ton of new questions,” Sloan says. SpaceX has no experience in human spaceflight — let alone human missions into deep space. The world has witnessed every instance of what happens when SpaceX’s missions go wrong — whether anticipated or not, whether even during spaceflight or not. SpaceX’s successes are well complemented by its failures.

That’s not the case with NASA.

The agency hasn’t just landed people on the moon — it’s designed and executed some of the most intricate science and engineering endeavors ever conceived by people. You have to look no further than missions like New Horizons’ investigation of the Kuiper Belt, Juno’s study of Jupiter, or the Curiosity rover’s continued trek across the red planet.

NASA has cemented its status “by doing things that no one else in the history of humanity had ever done before,” says Sloan. SpaceX has to cover a lot of ground if it wants to overshadow NASA. “It’s akin to dethroning Beyonce or Michael Jackson in the music world.”

“NASA is like yellow cabs — everywhere, easily recognizable, a long history of doing something reliably well,” says Sloan. “SpaceX is an up-and-comer like Uber, making major inroads into that monopoly, but with easily exposed weaknesses and problems. It has some ways to go.”

And while the new lunar mission will be quite interesting and exciting to watch, it just doesn’t possess the kind of gusto that warrants an expectation NASA is headed into its twilight years. After all, the mission simply calls for two people to take a Dragon 2 spacecraft on what is basically a trip around the moon and back. There’s no landing on the lunar surface. There is no collection of samples or, as far as we know right now, any kind of groundbreaking science or technology testing to be done.

“NASA still has a bunch of other cool shit going on,” Sloan says.

The only new ground SpaceX might break with this mission is that it makes potential tourist trips to the moon seem much more realistic than ever before. Two private citizens are basically paying a rocket-load of money to go to the moon — much more than most of us plebes might ever hope to see in our lives, but affordable for a small segment of the world’s population.

This is unusual for SpaceX. Musk has continually reiterated that his company’s goal is to make trips to Mars affordable for future generations. He wants to open up space travel and the colonization of other worlds to the entire globe. Would entertaining a trip to the moon for two rich-as-hell individuals actually impede the progression of this goal?

So far, most coverage of this mission has framed it as a one-off project. In Sloan’s view, there’s no reason as of yet to think SpaceX is seeking to make a foray into space tourism. If it does, however, “no one will be able to offer what SpaceX is offering,” he says. A trip to the moon is beyond the short-term scope of practically any company.

Regardless, it needs to very careful about how it publicizes the trip and what its message is in order to continue riding high on support from consumers and the public sphere. A changing perception that the company now wants to serve the ultra-wealthy could punch holes in the goodwill the company retains so far.

That will be an especially fraught situation if the mission ends poorly. “People need to be onboard for success and for failure,” says Sloan. “If it ends in failure, people are not going to want to be associated with that kind of offering,” whether it’s to orbit, the moon, Mars, or elsewhere. So far, the public has not really held it against SpaceX when things blow up. All that will change if there is a loss of life.

Because SpaceX is a business, failure won’t simply mean a loss of faith by the public, but could also plunge the company into financial ruin. NASA has never had to face the same degree of scrutiny, since its missions have always been in the name of adventure, science, and the prestige of the country.

The other consequence to SpaceX’s moon mission is how other private industry players are going to react. So far, most major companies have been mum. Players like Virgin Galactic and Blue Origin have express goals to get into the space tourism business, and seeing SpaceX potentially push itself into that doorway — in such an audacious way — could be unnerving.

But those companies ought to be fine. Branding, according to Sloan, is all about differentiating your company to set it apart and serve customers in ways other companies can’t. Virgin Galactic, for instance, wants to offer luxury experiences at lower prices, to a region in space that doesn’t require someone to undergo extreme preparation or be gone from Earth for an entire week.

In many ways, a move like this from SpaceX should not be a surprise. Nina Beckhardt, a branding consultant and founder The Naming Group, says NASA’s brand is perhaps just the result of having been the only party given the time and resources to pursue spaceflight to such great lengths. “In the past, NASA was all about research and puffing up our feathers to other countries,” she says. “These other companies are coming in and challenging that.”

It helps SpaceX and others that they are not tied to the regulatory and approval process that stymies the speed NASA can do things at. SpaceX can enjoy “the depth of a billionaire’s pocket,” Beckhardt says. “The private industry, because its pace of innovation is so rapid, they hold NASA’s feet to the fire. NASA has to keep up or face increased irrelevancy.” That competition spurs both sides to innovate more rapidly.

If SpaceX gets to the moon, it will be a major accomplishment, but it will be far from the beginning of the end for NASA. It may, however, force the agency to rebrand itself into something that operates better, faster, stronger.